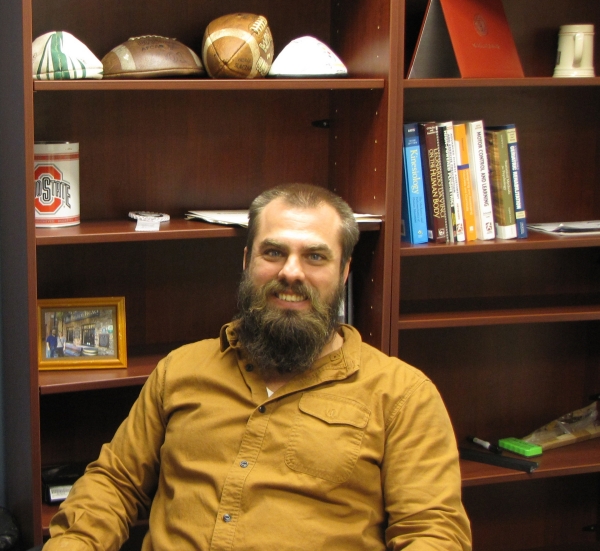 The prevalence of concussions continues to make headlines in the National Football League. In the 2015 movie "Concussion," Will Smith played a crusading forensic pathologist who discovers a neurological deterioration in football players -- chronic traumatic encephalopathy -- that resembles Alzheimer's disease.

Eric J. Schussler, an assistant professor of physical therapy and athletic training at Old Dominion University, played football through high school in Harrison City, Pennsylvania, and a couple of years in college.

Schussler's love of the game has stoked his current research. He is developing a program that incorporates the tackling techniques of rugby players. Schussler believes it could reduce concussions and other football injuries caused by helmet-to-helmet contact.

"As we started understanding more and more of what can happen when you have a concussion, it's become an issue that's staring football square in the face now," he says. "We need to see what we can do to minimize its effect on the game."

Schussler received his Ph.D. from Ohio State, where he conducted much of his concussion research, He arrived at Old Dominion University in August.

For years, Schussler says, football players have been taught to target the middle of the opponent's chest or back with their eyes when tackling, causing them to lead with their helmet. Rugby tackling, on the other hand, has traditionally involved keeping your head up and making first contact with the shoulder.

Schussler says there is no scientific evidence that rugby tackling is safer. That's why it merits further research.

Diagnosed concussions increased by 32 percent - from 206 to 271 - from the 2014 to the 2015 NFL season, according to league data. Contact with another helmet was the most common cause. Sports-related concussions also affect more than 5 percent of high school and collegiate football players.

"There's a lot of focus on treatment, which is great and I think is absolutely important," Schussler says. "But if we can stop or minimize the number of people who have concussions in the first place, we can shift to focus to prevention."

Schussler plans to start with children ages 9 through 13, to give them the right mechanics and mindset early on. "They are at the age where they have organized drills, can listen to instruction, and there is a limited amount of 'chasing butterflies' at that point."

That way, when they get older, "we would not be re-teaching and removing bad tackling habits," he says. "It would be ingrained from the very learning of the sport."

In college and pro football, rugby-style tackling has been gaining acceptance in the past few years. Ohio State's then-defensive coordinator, Chris Ash, persuaded head coach Urban Meyer to employ the rugby style in the 2013 season as opposed to the "head across the bow" model that has been used historically. Ash was inspired by Seattle Seahawks head coach Pete Carroll and has been spreading the gospel as Rutgers' head coach.

"Athletics is always top down. Whatever they are doing at the pros, college is going to do; whatever they do at colleges, high schools are going to do," Schussler says.

"The players aren't usually aware of what they should be focusing on, so we need to get the coaches and the parents on board to help both from a culture standpoint as well as a knowledge and education standpoint."