From Senegal to Norfolk, M.B.A. Graduate Has Made the Most of Her Professional Journey 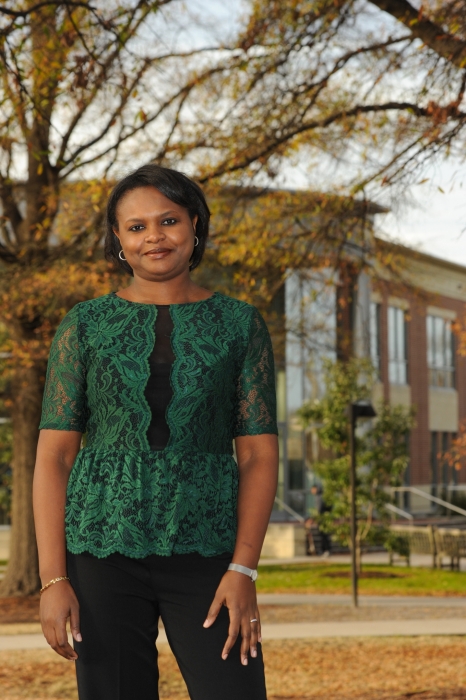 Fatou Diouf's journey has taken her through three continents and two advanced degrees, and to the cusp of a career at the intersection of mathematics and finance.

When she graduates Saturday, Dec. 17 with her M.B.A. from Old Dominion University, she will celebrate with a childhood friend from her neighborhood in Senegal's capital, Dakar. That companion is her husband, Mamadou Seck, an assistant professor of engineering management and systems engineering at Old Dominion.

"We grew up neighbors from the age of 6. We used to take the same bus to go to school," Diouf said.

But they didn't start dating until they were far from home, in the Netherlands, where each had moved independently for jobs. When Seck was offered a position at Old Dominion's Frank Batten College of Engineering and Technology, they left for the United States with their new daughter, Oulimata (now 3).

"For us, it was the right move. I had just had our baby, and wanted to build on my statistical experience, Diouf said.

Diouf is a scholar in her own right, earning a doctorate in electrical engineering in France. She was in the Netherlands for a three-year Marie Curie research fellowship sponsored by the European Union.

Her work in statistical modeling led her to the M.B.A. program at Old Dominion. She has been a full-time student while juggling motherhood and mastering her third language (Diouf spoke French and Wolof growing up in Senegal).

Her accomplishments in the classroom and beyond soon caught the attention of faculty members in the Strome College of Business.

"Fatou is a very impressive individual," said Bruce Rubin, associate professor of finance. "She is very bright, capable and, above all, very humble. As a student, she has been impressively outstanding, juggling a workload of school, assistantship and family. I have noticed that whatever she becomes involved with at school culminates with an excellent outcome."

That includes being part of a three-person Old Dominion team that finished third in the 2016 MIT Sloan Sports Analytics Conference case competition, sponsored by Ticketmaster. The Old Dominion team, which also included Rohit Dalal and Alexandra Iqbal, finished ahead of such schools as MIT, Harvard and the University of Virginia.

Diouf is grateful for the support and opportunities she has received at Old Dominion.

"Dr. (Kiran) Karande (associate dean of business) has involved me in so many activities, such as being part of a strategic meeting with the Strome College of Business executive advisory board, and wanting to know my opinion about so many subjects. Dr. Rubin and Dr. Karande have given me access to so many people. I feel very fortunate."

With her third advanced degree in hand, Diouf is looking to combine her engineering, statistical and entrepreneurial expertise.

"These different programs have given me a broader idea of business and entrepreneurship," Diouf said. "My mom was an entrepreneur when we were growing up, but she learned by doing. Having this M.B.A. knowledge will be invaluable for me."