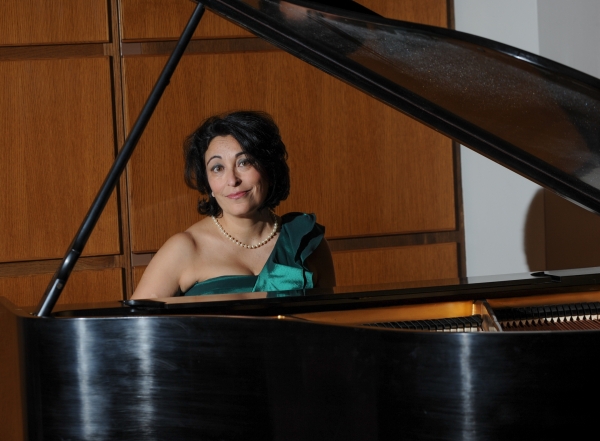 When Patrizia Lo Betti came to the United States in 2011 she wanted to teach piano lessons to young children. That had been her passion for the previous 30 years in Italy. But there was one problem: She didn't know how to speak English.

Lo Betti came to the United States when her husband, Alfonso, was assigned to a job with NATO in Norfolk. She decided to go back to school. However, her first priority was mastering the English language.

She took language classes privately. She then took the TOEFL (Test of English as a Foreign Language), which is designed to measure the English language ability of non-native speakers who want to enroll in English-speaking universities.

She failed the first time, but passed on the second try with assistance from Old Dominion University's Office of International Programs.

Lo Betti admits that she was frustrated but refused to stop. "I wanted to get it done. I just wanted to be able to understand, and I wanted people to understand me," she said. "It felt in a way like I was handicapped."

Lo Betti already held a master's in music performance from the Conservatory of Music Antonio Scontrino in Trapani, Italy. But after breaking the language barrier, she was ready to go back to school for another degree.

She enrolled in ODU's graduate music program in the spring of 2015 as a piano performance major. Her goal was to become better at her craft.

With the University's help, she landed a part-time job at the Academy of Music in Norfolk, teaching the Suzuki method, a Japanese principle of playing music through listening, imitation and repetition.

Nancy Klein, the graduate program director for the Department of Music at Old Dominion, says LoB etti's desire to learn and overcome challenges impressed her from the beginning.

"At a time when many people are content to rest on their life accomplishments, Patrizia desired to enter an entire course of learning. I'm so proud of her and how far she's come," Klein said.

Learning a new language and getting used to a new country wasn't her only battle, Lo Betti says. She also had to deal with life as a military wife and going through it all without her husband. After his posting with NATO ended, he returned to Italy, but now he's back in Norfolk.

"When a family is divided and you love each other, it is hard, but I'm glad we are back together again," she said. "It was tough for us."

When Lo Betti receives her degree on Saturday Dec. 17, her biggest fans will be watching -- her husband and daughter Maria, who is also an Old Dominion graduate.

"I enjoyed ODU with my professors and other students," said Lo Betti, who wants to become a full-time piano instructor. "They helped me succeed. It's bittersweet because I hate to leave, but I'm happy to finish. ODU gave me an opportunity that I will never forget."