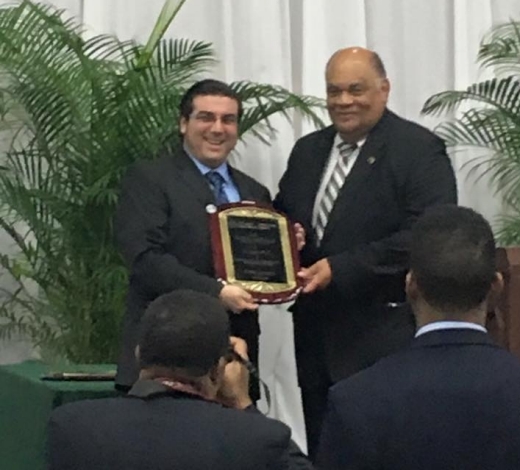 Santo has also been chosen to receive the Tidewater Distinguished Merit Award from the Virginia Center for Inclusive Communities at the organization's awards dinner April 7, 2016.

Santo was honored by the Urban League for his "dedicated and exceptional community service exemplifying the life and work of Dr. Martin Luther King, Jr."

Santo last year conceived and produced the multi-media program "Birth of an Answer" to mark the centennial anniversary of D.W. Griffith's landmark, and racially controversial, film "Birth of a Nation."

Using music, film - including the short "Our Nation" that was written and produced by ODU's film department - and expert panelists from the film-making industry, Santo engaged community dialogue regarding racial stereotypes in the media and explored the historic African American creative response to "Birth of a Nation."

"Birth of an Answer" was performed twice to capacity crowds at Norfolk's Attucks Theatre and on Old Dominion's campus at the Chandler Recital Hall.

Santo's project was supported by Old Dominion University's first grant from the National Endowment for the Arts.

"It was an incredible honor to receive the Urban League of Hampton Roads' Martin Luther King, Jr. Community Service Award on behalf of the Institute for the Humanities and its many collaborators on 'Birth of an Answer,'" Santo said. "Though my name is listed on the plaque, this was truly a team effort and there are so many individuals and organizations who contributed to making the program a success."

Old Dominion's Institute for the Humanities is dedicated to community engagement through artistic, cultural and creative programming that generates critical conversations around issues of significance to residents of Hampton Roads.

Santo added, "We strive to connect the University, its faculty and our students with the broader Tidewater community in a spirit of collaboration and innovation. In particular, the Institute for the Humanities embraces and promotes an ethos of social justice, human right and respect for difference among all residents of Hampton Roads."

Among those also honored by the Urban League of Hampton Roads and Norfolk State University at Community Leaders' Breakfast was Ashby Kilgore, the superintendent of Newport News Public Schools.

An Old Dominion graduate, Kilgore received a community service award for her work to increase the academic performance of Newport News' students, and for her leadership in multiple educational and civic boards.

Kilgore is a previous winner of the Outstanding Citizen of the Year Award presented by the State Coalition for Justice for Civil Rights.

The Virginia Center for Inclusive Communities will honor Santo for bringing together "diverse community members to grapple with the 100th anniversary of a controversial and prejudicial film," said Jonathan C. Zur, president and CEO of the Center. "VCIC applauds the Institute (and) Dr. Santo for making a significant contribution to community awareness and engagement in Hampton Roads and beyond."