Grant-Winning Chesterfield Heights Neighborhood Thanks ODU, Hampton U. for Support 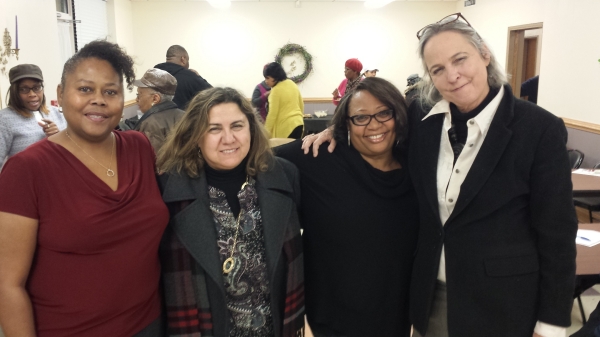 "I'm saving the good news for last. Y'all be patient, now," Cheryll Sumner, president of the Chesterfield Heights Civic League, teased the audience at the Shanhope House community center during the Jan. 25 meeting.

With the smell of homemade ham biscuits and coleslaw wafting through the common room, Sumner would tell two dozen residents of the historic Norfolk neighborhood how a major federal grant, coordinated by Old Dominion University, would change their lives.

First, she introduced the "special guests" at the civic league meeting.

"I know you may have heard about this on the news, but I want to bring you back a year or so," Sumner said, by way of introducing Mujde Erten-Unal, associate professor of civil and environmental engineering at Old Dominion University and Mason Andrews, professor of architecture at Hampton University.

"Many of you remember how the students from Hampton and Old Dominion University visited a lot of your homes. They saw your issues with high water first-hand," she said.

The Chesterfield Heights neighborhood is among a handful in Norfolk most susceptible to recurrent flooding during storm events. For a senior design project last year, Old Dominion engineering students and Hampton University architecture students collaborated to design low-cost adaptations that could increase resilience to storm events, to allow homeowners to stay in the neighborhood, which is more than a century old.

"The students came up with innovative designs, and they were included in the grant. Last week we found out that Norfolk was awarded $120 million," Sumner said, to rousing applause from the room. "I'm excited. It means that Chesterfield Heights is still going to be here in 2100."

Wilma Gerald's hand shot up at the end of Sumner's remarks. "I'd certainly like some of the students who worked so hard on this to get employed because of this grant," she said, to another round of applause from the room.

Erten-Unal said that six of her engineering graduates have earned jobs doing resilience-related engineering work in Hampton Roads, in part because of the work conducted on this project.

"Thank you so much for the trust you placed in our students," she said. "They wanted to do their best to develop sustainable solutions for the neighborhood. Many of them had never been to Chesterfield Heights, but they felt like part of the community."

Andrews told the audience that combining the passion and brainpower of the students with the open-mindedness of the long-time residents of Chesterfield Heights was a sure-fire way to develop resilience.

"Resilience is kind of a word for 'the government is not going to take care of us.' We need to be talking to our neighbors and checking on our neighbors. We are all in this community together," Andrews said.

As the meeting broke up, and participants shared a potluck supper, a steady stream of residents came up to the two professors, to thank them and ask about their students.

"I could just about cry," gushed Karen Speights, whose mother has lived in Chesterfield Heights for more than 50 years.

"They're just young people, but these students came up with so many great ideas. It's just inspiring," she said.

Andrews asked how she and Erten-Unal could purchase memberships in the Chesterfield Heights Civic League. She was met with a wave of Sumner's hand.

"You are honorary members. For life!" she said.