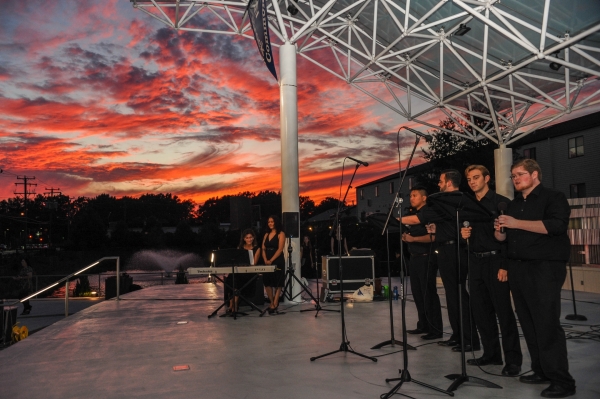 The Diehn Chorale on the Brock Commons stage. 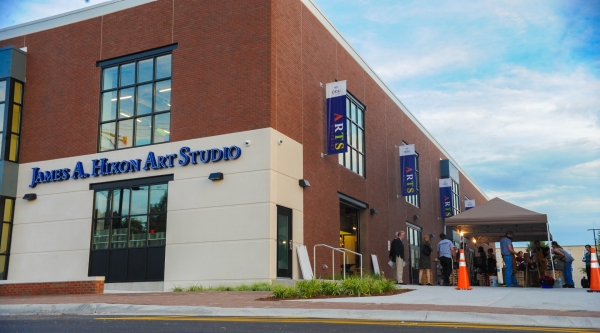 The James A. Hixon Art Studio. 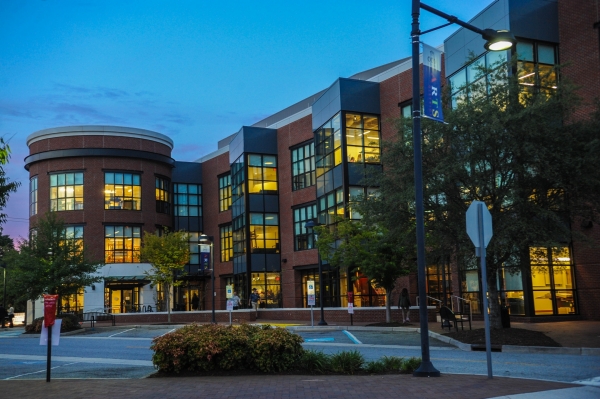 Fine arts at Old Dominion entered a new era Wednesday when President John R. Broderick dedicated two new buildings and an amphitheater bearing the names of longtime friends and benefactors of the University.

"This solidifies Old Dominion's rank among Virginia universities as a place that puts the arts in a spotlight," Broderick said.

Dean of the College of Arts and Letters Charles Wilson said he was excited to move forward with the new arts district.

"Faculty have a new venue within which to mentor their students, to share their expertise, to share their craft and their skill," he said. "Likewise, our students have new facilities to start on a path of creation and innovation that will be transformative to them in the short term, and in the longer term of their careers. Without the generous support of our friends, we would not have been able to witness this today."

Joining the Baron and Ellin Gordon Art Galleries and the Goode Theatre on Monarch Way, in the University Village, the cutting-edge facilities offer Old Dominion students and faculty a wealth of academic opportunities and Hampton Roads residents a vibrant destination for performances, demonstrations, festivals and exhibits.

"These facilities are going to allow us to expand our talents to become better performers, artists and teachers," Christian Hayward, a senior vocal performance major, told the guests. "I can speak on behalf of my friends, colleagues and fellow performers by saying that what you have done for us will live on for generations. And the things we will learn here will stay with us the rest of our lives."

Sharifa Reynolds, a senior graphic arts major who gave tours in the Barry Arts Building on Wednesday, noted the rewarding sense of unity arts students now feel, and that she's glad the village opened during her time at ODU.

"I think it's nice that we all get to be amongst each other now instead of being separated," Reynolds said. "I like how ODU has made this whole area the arts district. It's cool."

The Barrys donated $2 million to help bring the Barry Arts Building to life. The $13 million, 39,000-square foot building has three floors of offices, classrooms and studios, in addition to two of the finest art history libraries in the country - the Elise N. Hofheimer Art Library and the Jean Outland Chrysler Library of the Chrysler Museum of Art.

The latter had outgrown the Chrysler Museum in downtown Norfolk, which Richard Barry recalled with amusement as the spark for he and his wife's involvement in the Arts Village. Carolyn Barry has been a docent at the Chrysler Museum for more than 30 years.

"The first thing we did was come see John Broderick and ask him if he had a place to put the library," said Barry, the retired vice chairman of Landmark Communications and a former rector of ODU's board of visitors. "He said, 'No, but we can create one.'''

Barry noted that, as a child attending nearby Larchmont Elementary School, he rode his bike through the neighborhood, comprised largely of derelict houses, that is now home to his state-of-the-art namesake building.

"This remarkable growth and development in recent years is very much because of President Broderick's visionary leadership across the board," Barry said.

James Hixon, executive vice president of law and corporate relations for Norfolk Southern Corporation and a former ODU board member, said he was thrilled to contribute to the arts village that now features the 26,000 square-foot, $6 million Hixon art studio.

"This will help transform Old Dominion's impact on the arts," Hixon, who donated $1 million, said of the arts village. "It gives students modern facilities to develop their skills and a venue in which to display those skills."

The Brocks, who gave $1 million to help complete the $3 million outdoor amphitheater, were recently named national "Outstanding Philanthropist 2015" by the Association of Fundraising Professionals. Joan Brock holds a master's in humanities from ODU, and she praised the University for its leadership role in the arts.

"This is the hub of creativity in our region now," she said. "With these new facilities, the sky's the limit."