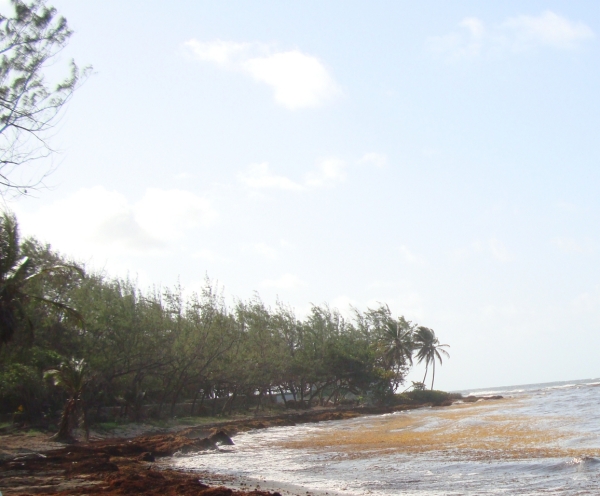 A seaweed-filled beach in Barbados, photographed on a recent visit by ODU chemist Alvin Holder (below). 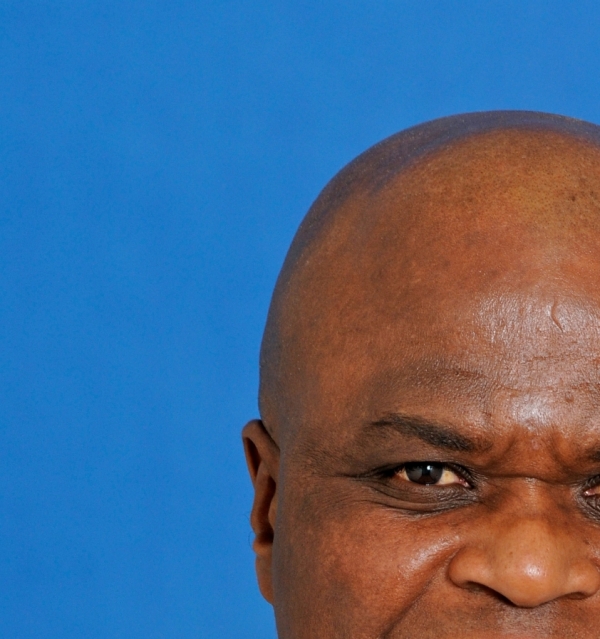 Alvin Holder is worried about Barbados.

Born and raised on the Caribbean island, and educated in its most prestigious secondary school, the Old Dominion University chemist watched with a concerned, yet optimistic eye this summer as vine-like sargassum seaweed swept onto its beaches.

The yet-unexplained epidemic of seaweed has overwhelmed pristine beaches in Mexico and throughout the Caribbean since the spring. But as an associate professor of chemistry, focused on cancer research using inorganic compounds, Holder knows seaweed extracts can be useful to his work.

"Sargassum species have great potential to be used in pharmaceutical and nutraceutical areas, and that is proven," said Holder, who noted the species are full of bioactive compounds such as vitamins, carotenoids, proteins and minerals.

Holder has partnered with a teaching friend in Barbados, a natural products chemist, to accept seaweed extracts for use in his biological studies. Holder works in tandem with research professor Stephen Beebe of Old Dominion's Frank Riedy Center for Bioelectrics to test natural and synthetic inorganic products on breast cancer cells.

"The history of medicine has been one that has used these compounds from plants," Beebe said. "I know it's something Alvin is very interested in, looking to see if there are substances in those plants that can affect cancer cells."

There are plenty of extract samples at hand, to be sure. But the unfortunate flipside for Holder is the seaweed has rained panic upon Barbados' tourism industry, which has driven the island's economy since sugar production dwindled over the last half-century.

Work crews with land-moving equipment labor frantically on affected Barbados beaches to collect seaweed and either stash it in piles or haul it away, Holder said. But it is difficult to keep up with the seaweed influx that Holder said also is killing endangered turtles and affecting the fishing industry.

"It is problematic," he said. "The hotels are worried about tourists not coming because of this."

Holder saw it for himself this summer when he and his family visited Barbados and his nearly 300 year-old alma mater, The Lodge School, in the parish of St. John.

"We were shocked," he said. "We should be putting good use to the seaweed instead of dumping it in big piles where it smells bad rotting on land."

Holder's research and teaching acumen have caught the attention of fellow scholars who hail from Barbados. One recently bragged about Holder to the well-known Barbadian journalist Tony Best, the North American correspondent for Nation News, Barbados.

Best wrote a column on Holder and promised to interview him again for a planned larger piece on issues confronting Barbados. To Holder, those issues start with the economic shift that saw numerous prime sugar cane fields bought up and converted to golf courses.

It is sad, he said, that Barbados has so dramatically reduced sugar exports. Holder fondly recalls "sucking cane" during lunch breaks from a crop that bordered his high school.

Still, Holder is proud of his native land, and includes multiple links to photographs of Barbados on his email signature. But Holder, who has written two text books and more than 50 scientific articles, said he will not go back to live and work there as long as he has vital academic research to pursue here.

"Probably I will return when I reach 'that age,' " said Holder, who added that his academic interest was sparked as a young boy by a chemistry set left when a cousin went off to college. "There are no research dollars there. They only care now about tourism, not about STEM and science."