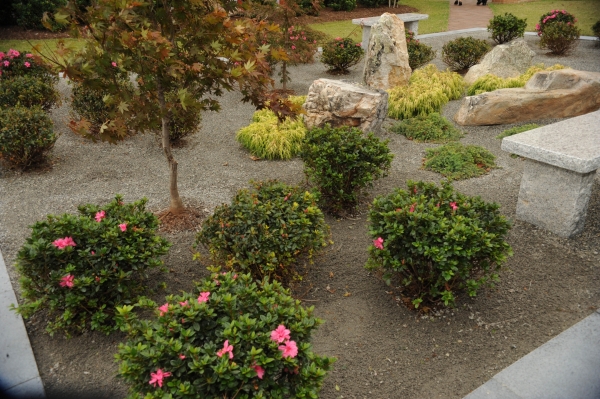 Hiroyuki Tesshin Hamada came from his home in Japan for the dedication of the Japanese garden in his name. 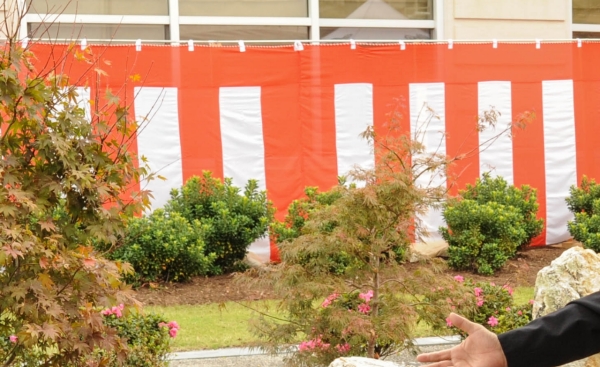 Hiroyuki Tesshin Hamada's decades of transforming lives at Old Dominion through martial arts instruction was honored on campus Monday with the dedication of the Hamada Japanese Garden.

"His reputation spans the world," interim provost Chandra de Silva said of Hamada's iconic stature. "But today I'd particularly like to recognize him as a Monarch."

Hamada, who was the nation's first Martial Artist in Residence when he came to ODU in 1975 from the College of William and Mary, traveled from his home in Japan for the ceremony that was attended by about 200 people.

He retired seven years ago as martial arts coordinator and associate professor of exercise science, physical education and recreation. Former students took over the martial arts program that remains popular on campus.

Several attended Wednesday's dedication of the meditative garden his students, the University and Hamada brought to life as a tribute to Old Dominion students, faculty and Hamada's family.

"It is simply a pure joy to be right here standing with my many, many good friends," Hamada said. "I feel so humbled and honored to be in your presence today."

The rectangular garden designed to display what Hamada called the "subtle beauty of simplicity" is neatly placed between the Diehn Center for the Performing Arts and the residential dining hall that is under construction on 49th Street.

It features an array of young azaleas and trees, is bordered with granite pavers, and includes stone benches and five specially selected boulders that represent Hamada's five decades of influence at ODU.

"He impacts the life of everybody who crosses his orbit," said Stephen Mahan of Virginia Beach, who noted he began learning under Hamada in 1979 when he attended law school at William and Mary, where Hamada returned to instruct even while working at ODU.

Hamada has made significant contributions to the development of classical and traditional martial arts. His honors include the highest title of "Hanshi" in six major styles from the Dai Nippon Butoku Kai martial arts society of Japan, which he now serves as president.

He is the author of 12 books on martial arts and self-defense. During his time at ODU, Hamada served as special assistant to the president for the promotion of Japanese exchange programs.

"There are thousands over the past 30 or 40 years who have come through the 'dojo' of Old Dominion and learned a different way of things," said Michael Boyle, a 1983 University graduate. "He changed my life. He's changed many of your lives, and without him we wouldn't be here today."

Hamada said he hopes the garden is simply a first phase that with additions may become a "small forest."

"It is our sincere hope that this Japanese garden will become a special place for the campus community to enjoy a moment of sublime serenity and self-reflection," he said.