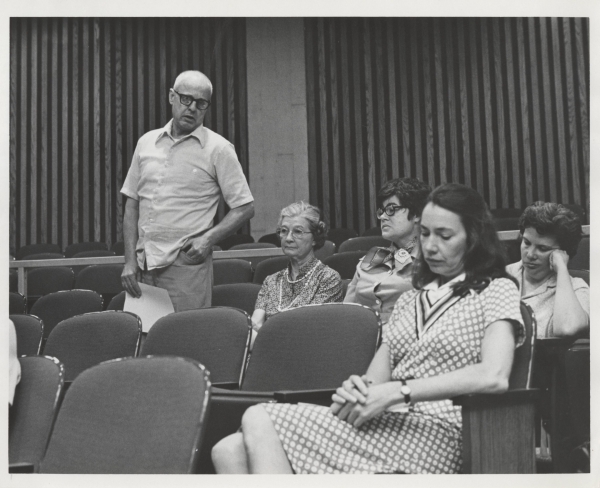 Ernest Rhodes speaking during a Title IX hearing in 1976.

Ernest Lloyd Rhodes, Professor Emeritus of English and retired Lt. Commander in the U.S. Navy, died in the early morning of Sept. 12, at the age of 100.

Rhodes came to Old Dominion University in 1960 as a Shakespeare scholar. Prior to that, he was a reporter for the Northern Virginia Daily and the Alexandria Gazette. During World War II he served as a boat officer in the Guadalcanal and as Landing Craft Control officer for Red Beach One during the April 1-5, 1945, attack on Okinawa.

During his 20-year ODU career, Rhodes staged many plays; built a replica of Henslowe's Rose stage theater, that was displayed in London at the Bear Gardens Museum; published "Henslowe's Rose Stage and Staging" (U. Kentucky Press, 1976); and also participated in the second wave of feminism as it swept the country and campus, sharing the activism of his wife, Carolyn Rhodes, Professor Emerita of English and Women's Studies.

Not only did Rhodes testify in support of pay equity for women at the University's Faculty Senate hearing on Title IX, in 1976; he also served as associate editor for "First Person Female American" by Carolyn Rhodes (Whitson, 1980); and when Carolyn Rhodes was awarded Fulbright grants for year-long teaching assignments overseas - one in Romania and two in China - he went along to provide technical and household support.

A self-identified feminist, Rhodes was well-known for supporting the ODU Friends of Women's Studies and co-hosting countless feminist gatherings in the Rhodes' home.

Rhodes credited much of his feminist awareness to his mother, Blanche, who relocated him and his three siblings to the Mooseheart Child City & School, an orphans' home-school which still operates, when she was widowed. She worked at the orphanage while her children were trained in a vocation and earned high school diplomas.

At age 95, Rhodes published "A Coal Miner's Family at Mooseheart" (AuthorHouse, 2010), a memoir of the surprisingly utopian life there with 1,300 other children, from 1919 through the Depression.

"Rest in peace, Ernest Rhodes. Father, husband, soldier, scholar and friend to hundreds of us. We will always remember your simple, loving warmth, and the hope you radiated," wrote renowned ethicist and philosopher Judith Andre, Professor Emerita of Michigan State University.

A celebration of life service is planned for Sunday, April 17, 2016, on what would have been Ernest Rhodes' 101st birthday. The 4 p.m. event will be held on ODU's Norfolk campus at the Engineering & Computational Sciences Building, first floor auditorium and atrium.