Only Ex. Secretary to Serve Deans at College of Health Sciences Retires 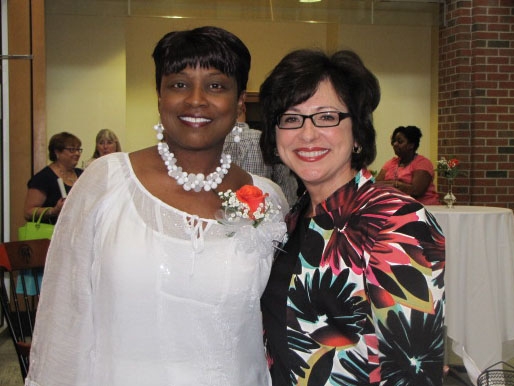 In 1982, Michael Jackson released "Thriller," the biggest selling album of all time. Prince William, the Duke of Cambridge, was born. And the blockbuster movie "E.T. The Extra-Terrestial" hit the big screen.

But another important event occurred - this one on the campus of Old Dominion University. Connie Davis Croker began her career here, where she would spend the next 33 years serving up smiles and expertise to administrators, staff, students and so many others.

Croker, who retired in August, holds the distinction of being the only executive secretary to the dean that the College of Health Sciences has ever had.

"I ended up at ODU after completing my Associates Degree at Tidewater Community College," she said. "I saw the job in the newspaper and when I got here I was surprised at how nice things were."

Croker took a temporary position under the wing of Barbara Wallace, director of continuing education within the School of Sciences & Health Professions, and started work in July 1982. After receiving a contract extension for a few years, Croker was approached in 1986 by Lindsay Rettie, the founding dean of the College of Health Sciences.

"She asked if I would be interested in transitioning into the position of executive secretary to the dean," Croker said. "Of course, I accepted the honor. In those days the recruiting process did not require as many steps as today, so a little paperwork and the job was mine."

The rest, of course, is history. Over the next 29 years, ODU would grow leaps and bounds, expanding beyond its Norfolk campus to create satellite campuses in Hampton, Virginia Beach and Portsmouth. The University also would build several important buildings, among them the Ted Constant Convocation Center, which hosts many big events and serves as home to ODU men's and women's basketball teams.

"Originally, the COHS Dean's Office along with the schools of medical technology, physical therapy and community and environmental health were located in Spong Hall and the two remaining schools, nursing and dental hygiene were located in the then-technology building," Croker said. "Later, all schools including the dean's office were finally housed within the Health Sciences Building."

Croker's tenure was marked by many changes of the guard. There have been five ODU presidents since she arrived on campus as well as five deans for the College of Health Sciences.

"I've had the pleasure to work with deans Lindsay Rettie, Cheryl Samuels, Andrew Balas, Deanne Shuman and Shelley Mishoe," she said. "I learned something different from each of them that I will carry along with me in the days ahead - from beginning under the deanship of the graceful Dean Rettie to ending with the very special team relationship with Dean Mishoe."

The parting of Croker is a bittersweet one, Mishoe said.

"Connie's retirement reception was a culmination of her many years of outstanding service to every dean since the college was formed," she said. "It was a real joy to interact with Connie's family and friends during the reception and to witness the outpouring of fond remembrances, appreciation and best wishes to someone who has been so vital to this college."

Croker has seen the university evolve from typewriters to computers and high-tech printers. She still expresses her relief at working on projects without having to use correction tape and erasers.

One of the lessons that served Croker well during her years at ODU is, "Listen and you will learn," she said. Doing so has allowed her to explore and ask questions and build on her knowledge.

The youngest of 10 children, Croker was born and raised in Suffolk. She recently remarried and still lives in Suffolk. During her time at ODU, she says she has always enjoyed the University environment and that it is one of the things she will miss the most.

"It's interesting to occasionally take a lunch break and walk through and tour the newly designed/renovated buildings and meet the staff and faculty and learn their purpose," she said.

As for her retirement plans, "reaching out and enjoying whatever makes me happy" is the first thing on Croker's list, she said.

"I'm embracing the blessing of retirement at the age of 54 and looking forward to the opportunity to spend time with my kids, grandkids, my new husband and of course some traveling," she said. "I'm leaving the door open for greater things to be added to this list."

To that end, Croker still holds a strong commitment to the success and mission of the College of Health Sciences.

"The college is still in need of a new building because of its drastic growth," she said. "I look forward to visiting the new building one day."