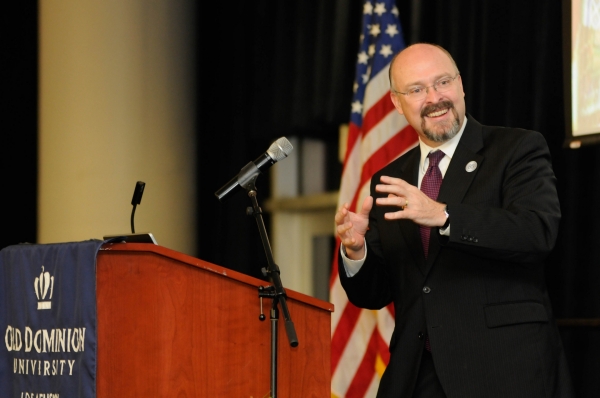 Old Dominion alumnus Val Huston launched his career as a United States commercial officer in Asia by happening upon study-in-China brochures at Webb Center 25 years ago.

"I thought, 'This looks kind of cool,''' Huston told his audience at Monday night's Confucius Institute Great Discussion Series Lecture. "Then I looked at the price tag and said, 'Oh, I can't pay for this.'''

However, fundraising help from his local church sent Huston on his way.

He returned to campus as the principal commercial officer for the U.S. Embassy in Beijing since 2013. In that role, Huston directs a 35-person staff, mostly Chinese, in the largest of China's five consulate districts.

He spoke with budding entrepreneurs at Old Dominion's Strome College of Business on Monday, and then addressed U.S.-China trade relations in the Big Blue Room at the Constant Convocation Center.

"Some have said without the trade and the commercial relationship between the U.S. and China, there wouldn't be a relationship," Huston said. "We don't agree on a lot of political issues, so the bedrock of the relationship is commercial, mutually beneficial opportunities."

Huston noted the distrust in such areas as cybersecurity and banking that strains interactions between the super powers.

"If the relationship is going to mature, in my view, it's going to be based on greater mutual trust, which means it has to be demonstrated through greater mutual investment in each other's markets," Huston said.

Huston enrolled at Old Dominion after spending six years working in the U.S. Navy's nuclear power program. He began in engineering before redirecting his interests to philosophy and East Asian studies.

A 1991 ODU graduate with a master's from George Mason University, Huston also has worked in international trade in the Philippines and in Europe. He said China needs to transition from an infrastructure-based economy to one more consumer-led, "and I think that's starting to happen," he said, "particularly with e-commerce."

"If we can keep moving toward win-win opportunities and a robust mutually beneficial bilateral investment treaty, that would be great, but it requires each side to bite the bullet and take on some of our domestic vested interests," Huston said. "And obviously the information and communications technology sector is an area that, whichever direction that goes, that could greatly impact the future of the U.S.-China relationship."

Old Dominion's Confucius Institute promotes understanding between citizens of the U.S. and China using cultural appreciation, scholarly initiatives and language. An academic resource center on China, the institute is building stronger ties through language and teacher training on campus and in public and private schools in Hampton Roads.