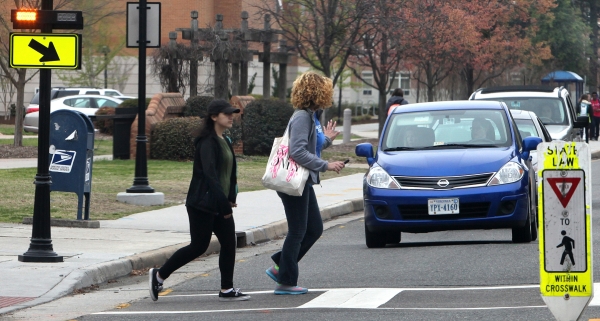 When he researches traffic behavior, as he does on a regular basis, Old Dominion psychologist Bryan Porter always looks for the unintended results of a law or other intervention.

That is, when the University wanted to install lighted, mid-street crosswalks - known as "Rectangular Rapid Flash Beacons" - at 10 spots around campus last year to ensure motorists yield to pedestrians, Porter had questions:

Would pedestrians brake as well?

Or would the caution lights plus the power of pedestrian right-of-way promote a sense of complacency or risk-taking among walkers and create dangerous interactions?

"It made sense to our team to also look at the pedestrians, who have as much responsibility for their safety as drivers do," Porter said.

Recent studies reveal 22 percent of the world's traffic fatalities involve pedestrians. And in the United States, pedestrian deaths rose from 11 percent to 14 percent from 2003 to 2012.

Scott Silsdorf, Old Dominion's director of transportation and parking services, said the City of Norfolk asked his office to study driver and pedestrian behavior at the campus crosswalks where the beacons were under consideration.

"I was familiar with Dr. Porter's work from my previous career as a transportation consultant in the region," Silsdorf said. "Collaboration with a colleague on campus was the best way to embody the spirit of 'Idea Fusion.' Bryan told me that in the past his students would travel all over the Commonwealth to do traffic research projects, so it was an easy decision to stay here on campus."

In the spring of 2014, Porter sent a handful of students to five campus crosswalks - three with flash beacons just installed, two without - to observe pedestrian and motorist behavior.

Over 50 hours across five rounds of observations, the students charted a total of 2,454 pedestrians and 1,312 drivers, and later conducted interviews with 265 students.

The results - that the flashing beacons are marginally effective upon pedestrian and motorist behavior - are under revision for publication in the journal "Transportation Research Part F: Traffic Psychology and Behavior." ODU students Ingrid Neto, Isabel Balk and Jennika Jenkins directed the study and co-authored the paper.

Studies have shown that drivers generally yield 70 percent of the time at crosswalks. But Porter's student researchers discovered drivers approaching flashing beacons were 1.5 times more likely to yield than at unequipped crosswalks.

The students also observed that 29 percent of pedestrians at flashing crosswalks stopped at the curb and 88 percent looked around for cars. Data did show an initial decrease in pedestrians looking before entering crosswalks before that response rose as the study progressed.

Of the pedestrians and vehicles identified for monitoring as they approached observed crosswalks, five became involved in a "near-miss" situation; the students also witnessed eight other near-misses among pedestrians they weren't specifically watching.

"We found a significant difference in how students perceived safe crossing," Porter said of information gleaned from post-observation interviews. "Specifically, students had a higher self-perceived feeling of safety at the end of our project" nearly two months after the flash beacons were activated.

Porter and his students repeated the study this year now that all 10 mid-walk crossings on campus have beacons. Those results have yet to be analyzed. But Porter said his team was excited to participate again and is eager to compile and share its findings.

"Any research and learning we can do on campus is great for the students," Porter said, "and doing something for the school is fun, too."