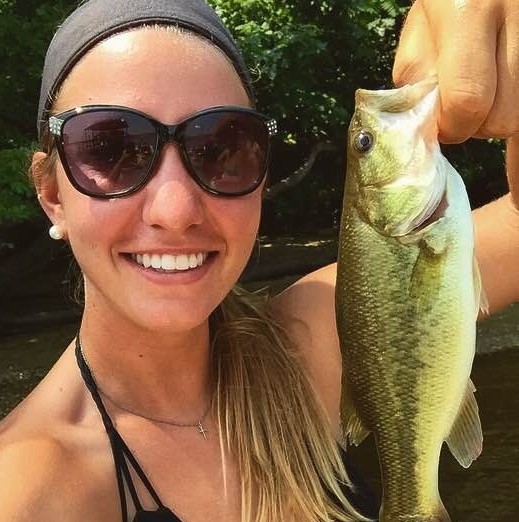 Old Dominion marine biology student Haley Burleson is thrilled to work each summer day with one of the most enduring striped-bass indexing programs in the country.

"Any research that helps keep a population in balance is important," said Burleson, part of the Virginia Institute of Marine Science's juvenile striped bass seine survey. "Whether it's a bee or a shark, they have an impact on the world. If we keep one population in good standing, it keeps all ecosystems in balance."

Since 1967, the Institute of Marine Science in Gloucester Point has monitored the abundance and movements of juvenile striped bass - less than a year old - in their spawning and nursery areas along the James, York and Rappahannock rivers. It is the second-longest continuous striped bass index in the United States. The survey was discontinued in '73 when federal funding was cut, but reinstated in 1980.

The seine-net survey is part of the sampling program of young striped bass conducted by the Atlantic States Marine Fisheries Commission from New England to North Carolina.

The commission uses data gathered by the seine survey, conducted from July to September, to evaluate the size and health of the striped bass stock, and to predict striper populations for commercial and recreational purposes.

"I really like to do research in the field, so it's very interesting to be out on the water helping an ecosystem," said Burleson, a junior. "I never want to stop learning. I think every part of marine science is interesting, so I enjoy everything that I'm doing."

This is Burleson's second consecutive intriguing summer on the water. Last year, she was part of the student program at the Coastal Marine Education and Research Academy in Dunedin, Fla. that tags and monitors sharks and stingrays in the Gulf of Mexico.

Burleson recited a long list of abundant shark species she and her research team came across, among them nurse, blacknose, blacktip, bonnethead and Atlantic sharpnose. She hoped as well for at least one sighting of a tiger or great white, but found neither.

She returned to Old Dominion with a greater understanding of all sharks, however, and common-sense advice for beach-goers wary from the recent spate of shark attacks off of North Carolina.

"I would just say be careful, be aware of your surroundings," Burleson said. "The typical rules of the ocean; don't swim at dawn or dusk, because that's feeding time. If you cut your foot on a shell, get out of the water. If you see dolphins, yes, that's cool - but dolphins are chasing fish, and where there's fish there's probably sharks."

Burleson noted that lightning strikes remain more common than shark bites. She said swimmers should just be mindful that they have entered another animal's neighborhood when they wade into the waves to body surf.

"Just remember it's the sharks' habitat, and they're going to check out what comes into their environment," she said. "Sometimes people go to the beach and just see the surface of the ocean - but they don't always think about what is happening underneath the surface."