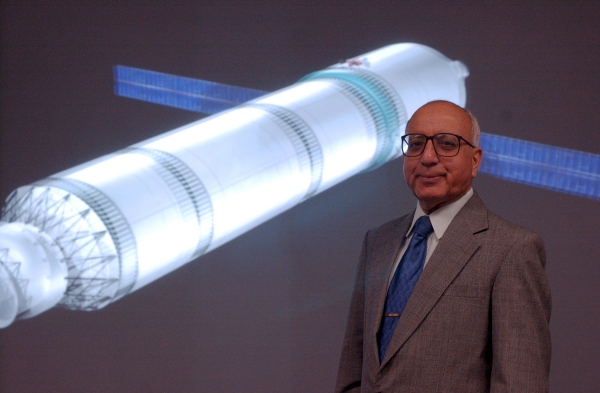 Old Dominion's Ahmed Noor, who recently retired as the University's William E. Lobeck Professor of Modeling, Simulation and Visualization Engineering, delivered the keynote address at a worldwide conference hosted by NAFEMS, the top global organization dedicated to the advancement and improvement of engineering simulation.

Noor, a frequent guest speaker at gatherings of scientists worldwide, spoke June 23 at the San Diego conference about "cogs" in the new economy - "cognitive computing for engineering analysis and design."

These cogs are not the wheels and gears that once drove the steam engine-era industrial activities; they're at the heart of what could very well be a new industrial revolution.

"We are witnessing a new revolution in computing and communication, brought about by the synergistic couplings of a number of technologies, including cognitive computing, Internet of things, mobile and wearable devices, big data prescriptive analytics, among others," Noor said.

In his talk, entitled "The Potential of Cognitive Computing for Engineering Analysis and Design," Noor identified some of the characteristics of the coming age of cyber-physical engineering systems, and their implications for product-creation tools, facilities and environments.

Noor, whose work in advanced engineering environments has garnered worldwide acclaim, believes it is possible to achieve "human-machine symbiosis; humans are always in the loop and both work together so the overall system functions at its best." He believes wearable computing devices are a precursor to the symbiosis.

Noor envisions cog-assisted product-development technologies where every phase of production is aided by cognitive computing and predictive analytics.

"IBM is working very hard to develop this type of intelligence," Noor said. "Engineering and simulation software vendors should seize the moment and work to integrate this feature in their next-generation offerings."

Considering the fast pace of change, Noor suggested society should learn to become much more nimble and agile. "Nobody should have a five-year plan that cannot easily be changed," he cautioned. "We should revisit our plans and strategies once in a while, perhaps every two months, and revise them in response to the changes we see."

NAFEMS, acronym for the National Agency for Finite Element Methods and Standards, was founded as a special interest group in 1983 to provide an independent, international authority on the use of the computer modeling and simulation methods and tools as vital components of the product development process.

Noor has delivered addresses at NAFEMS on several occasions. He said the value of the conference is in bringing together engineers, researchers and scientists to work collaboratively, "and accomplish much more than they can individually in their own space."