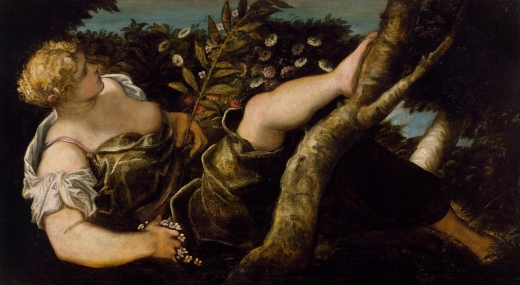 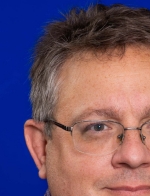 Around 1555, the Venetian master Tintoretto painted his "Allegorical Figure of Spring," which is now owned and exhibited by Norfolk's Chrysler Museum of Art.

The Chrysler's catalog entry notes the painting depicts Flora, goddess of flowers and spring, emerging from "the torpor of winter," illustrating fertility and "the generative power of the reawakening earth."

But to Old Dominion chemistry professor Craig Bayse and graduate student Sarah Horn, it is clear there is something amiss about the painting.

For an ode to the lightness of life, the scene is inordinately dark.

"So if you're thinking he's trying to depict spring, that's probably not how he originally painted it," said Horn, who teaches chemistry at Norfolk Academy. "It's probably undergone some sort of change in the pigment."

Decoding that pigment's degradation is the challenge Horn has taken on for her master's thesis under the tutelage of Bayse, selected the College of Sciences outstanding undergraduate advisor for 2015.

Beyond chemistry, both also share an interest in art; Horn in fact leads an annual spring-break trip to Italy for Norfolk Academy students to explore the chemistry of art restoration.

Horn mentioned a possible art-restoration project when she met Bayse last year. Bayse signed on, and helped guide the beginnings of Horn's work with significant assistance from Mark Lewis, conservator at the Chrysler Museum.

"We couldn't do this without Mark's help and expertise," Bayse said. "This is different for me; I usually do computational work, so being in the lab messing around with instruments and making compounds is a nice change."

As a conservator and art historian, however, Lewis ponders pigment changes all the time. In the case of Tintoretto's "Spring," Lewis explained Renaissance artists used a paint of copper resinate to create the color green.

The conservator and the researchers presume that what is now black in the painting was originally green. Lewis said pigment-degradation in paintings from the 16th century is common, yet mysteriously inconsistent.

"People have observed it over many decades, but we're trying to come to a better understanding of these copper pigments and why some alter and some don't," Lewis said. "The appearance of this masterpiece has changed so drastically over time. We're trying to learn why it's happened and if there's anything we can do about it."

Mondays when the museum is closed, Horn said Lewis allows the painting to be removed from the gallery and taken to the Chrysler's conservation lab, where microscopic samples can be collected for further study at Old Dominion's more extensive lab.

"So it's a good partnership on both sides," said Horn, who added she and Bayse are first trying "to figure out what the pigment really is, what its molecular structure is. Hopefully, that will lead towards being able to figure out why it causes blackening in the painting."

Horn said it is typical to see older paintings yellow due to the oxidation of varnish. "But what we're seeing here is more dramatic than what you typically see with oxidation with a varnish," she said.

Horn will spend the rest of the summer on the research - it has received a "Small Project Research Grant" from the Virginia Academy of Science - with an eye toward earning her master's a year from now.

"Dr. Bayse has been very supportive by making sure I'm doing what I'm interested in," she said. "It's something I think he's interested in too, the chemistry of colors."

For Bayse, the collaboration plays to his preference for hands-on work with student researchers. And he said he is as engaged as Horn in the search for understanding of the darkened pigment.

"We can't say we can answer the question one way or the other," he said. "But we've found a few things so far that are possibilities. We've just got to follow through."