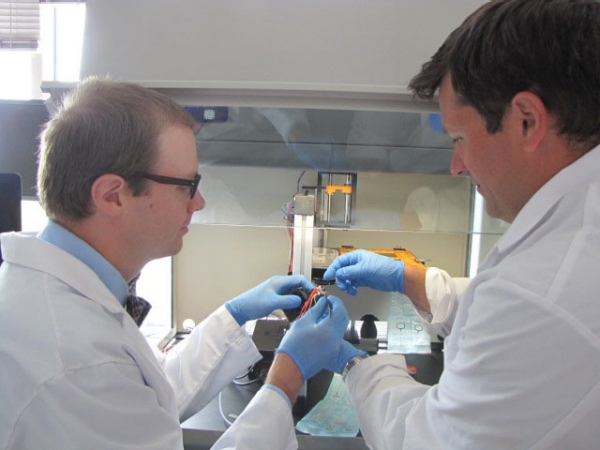 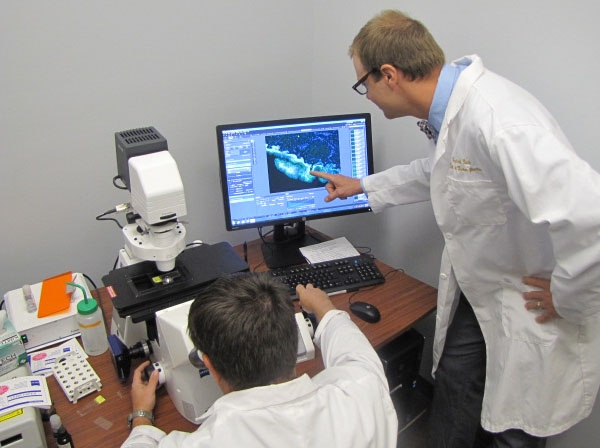 The research of Robert Bruno and Patrick Sachs could eliminate the need for those with high cancer risks to have elective surgery.

Actress Angelina Jolie has become a poster child of sorts for elective surgery to address breast and ovarian cancer risks triggered by her family's history of a mutation of the BRCA1 gene. Jolie lost her mother, grandmother and aunt to cancer, and two years after a double mastectomy, she revealed in March that she had her ovaries and fallopian tubes removed.

More than 1,800 mutations in the BRCA1 gene have been identified by researchers. According to the most recent data from the National Cancer Institute, 55 to 65 percent of women who inherit the BRCA1 mutation will develop breast cancer by age 70 and 39 percent will develop ovarian cancer by the same age.

Many of the mutations are associated with an increased risk of breast cancer for women and men, as well as several other types of cancer. These mutations are present in every cell in the body and can be passed from generation to generation. But not everyone who inherits a mutation gets cancer. Other genetic, environmental and lifestyle factors also contribute to a person's cancer risk. Still, as a precaution, many people elect to have preventive procedures.

Robert Bruno and Patrick Sachs, assistant professors at Old Dominion University's School of Medical Diagnostic & Translational Sciences, are working on research that could someday eliminate the need for such surgeries.

The two, who also teach at ODU's College of Health Sciences, have been exploring the phenomenon of how the microenvironment that surrounds cancer cells can suppress them as well as signal cancerous tumors.

To aid them in their ongoing research, the two scientists recently received a Commonwealth Health Research Board (CHRB) grant. The grant will provide Bruno and Sachs with $200,000 over two years. ODU was one of seven recipients of this year's grants. After weathering a rigorous selection process, the two made their final pitch before CHRB in May before being selected.

"I was guardedly optimistic about our chances," Bruno said, adding that the pressing nature of their research was one of the reasons for their selection.

Shelley Mishoe, dean of the College of Health Sciences, stated that this is the first time ODU has received this highly competitive grant, "which will enhance our faculty's efforts to conduct vital research to promote health in Virginia and around the world."

Their grant's title is "Chimeric mammary models for elucidating microenvironment contributions to tumor suppression and promotion." It involves taking human breast tissue, solubilizing it, and allowing it to form the extracellular matrix where tumors can be introduced. This allows them to study cells in more aggressive 3D interactions like cancer occurs in the body. Their previous research relied on lab mice breast tissue.

"This project will allow for us to decipher some of the micro-environmental changes that allow for breast cancers to emerge from their normal, suppressive surroundings," Sachs said. "Findings from these experiments will have broad reaching implications, which will also inform us about how a normal cell, such as a stem cell, is manipulated by its environment to become a mature functional tissue-specific cell type. Future studies will then allow for us to manipulate these environmental controls to not only prevent the emergence of diseases like breast cancer, but also to further our ability to generate engineered tissue in the laboratory."

Bruno, who received his Ph.D. in molecular medicine at the University of Maryland Baltimore, came to Old Dominion in 2013 as an assistant professor and director of the graduate program in molecular diagnostics at the School of Medical Diagnostic & Translational Sciences.

Sachs received his Ph.D. in human and molecular genetics from the Medical College of Virginia in 2010. He was recruited by ODU in the summer of 2013 by Roy Ogle, chair of the School of Medical Diagnostic & Translational Sciences. At that time, Sachs was working at LifeNet Health in Virginia Beach, a non-profit organ procurement organization providing donation systems for organ transplants.

Sachs says the grant money's importance is threefold. "It gives us the money necessary to carry these studies over into National Institutes of Health funding, it's the first CHRB grant for ODU, and the topic of the grant is an underrepresented subject matter in cancer research," he said.

Bruno and Sachs are a dynamic duo of sorts for the school, and their collaborative qualities have made them exemplary researchers, Ogle said.

"Regenerative medicine is highly collaborative or interprofessional...," Ogle said. "Rob and Patrick's skill sets complement one another nicely. They have also begun to collaborate with an MD from EVMS, Dr. Vivian Wu. For our school, they demonstrate the power of inter-professional scholarship, which is a great example for colleagues and students."

A change in research philosophy

The signing of the National Cancer Act of 1971 by then-President Richard Nixon tolled the beginning of the nation's war on cancer.

Much of the war was waged from the presupposition that cancer was a disease caused by a rogue cell that divided and multiplied until it destroyed its host.

However, almost 10 years before the U.S. launched its war, Dr. D.W. Smithers - who was then at the Royal Marsden Hospital in London - proclaimed: "Cancer is no more a disease of cells than a traffic jam is a disease of cars. A lifetime of study of the internal-combustion engine would not help anyone understand our traffic problems."

It was not until recently that cancer research has taken a turn to address Smithers' once-controversial observations. Bruno and Sachs have made Smithers' words their mantra.

"Breast cancer research to date has largely focused on the internal, genetic changes that lead to uncontrolled cellular growth and function," Sachs said. "A unique aspect of our project is to refocus on the signaling controls found in the microenvironment surrounding the cells. This understudied subject could allow for us to derive better methods of predicting tumor emergence leading to advanced preventative screening."