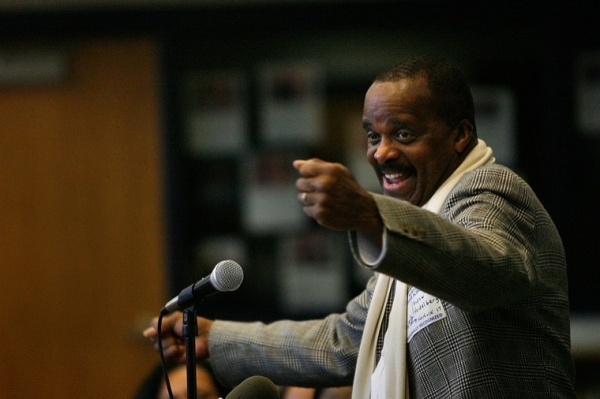 Local civil-rights leader Andrew Heidelberg, who was one of 17 African American teenagers who integrated Norfolk's public schools in 1959, and later documented his experience as part of his graduate studies at Old Dominion University, died July 6. He was 71.

Heidelberg, who was a retired banker residing in Hampton, died after complications arising from surgery, his wife Luressa Heidelberg informed The Virginian-Pilot. His life-long struggle for equality is cherished in the community and at Old Dominion, where he had worked on a master's degree for the past five years.

Old Dominion President John R. Broderick got to know Heidelberg during his time as a community leader, and then as a graduate student at the University.

"I was fortunate enough to sit down with Andrew on several occasions, and hear about his experiences as a member of the Norfolk 17," Broderick said. "Hearing from him about the struggle for desegregation of Norfolk schools was an incredible experience. What a wonderful, brave individual he was."

Virginia officials forced Norfolk public schools to close in 1958 as part of the state's "Massive Resistance" to federally mandated desegregation laws. State and federal courts ordered that schools be reopened and integrated in February, 1959, and Heidelberg and 16 others were asked by the local NAACP to enroll in previously all-white schools.

The "Norfolk 17," as they came to be known, were subject to taunting, abuse and threats for the simple act of going to school. Heidelberg not only attended Norview High, he starred at running back for the school's football team, helping the Pilots win the Eastern District title in 1961.

Desegregation of high school football was the subject of his master's research when he returned to school at Old Dominion. He was studying local media coverage of his football exploits in the early 1960s in order to demonstrate how anxieties over desegregation permeated otherwise benign reporting of high school sporting events.

Avi Santo, associate professor of communication at Old Dominion, was his thesis director and said working with Heidelberg was always exciting. "Andrew was an amazing human being who led an inspiring life," Santo said.

"He not only had great stories to tell about his experiences, but he also had the sophistication and insight to understand how stories work and the roles they played in painting a particular portrait of desegregation. I learned a tremendous amount about the local history of civil-rights struggles from him and I learned how high school football served - and continues to serve - as a site of struggle over race, masculinity and social acceptance."

Health issues forced Heidelberg to leave school before completing his degree. But Santo said the work he did for the program was more than worthy of a master's degree by "demonstrating a tremendous amount of intellectual bravery in willing to look critically at his own experiences and place them within broader conversations about race in American society."

In 1967, Heidelberg began working for the Industrial National Bank in Providence, R.I. After becoming a bank manager, then ultimately the first black vice president for Barclays Bank of New York, Heidelberg returned to Hampton Roads in 1994 to serve as assistant treasurer and chief deputy treasurer for the City of Hampton.

He participated in Norfolk's commemoration of the 50th anniversary of the end of the Massive Resistance in 2009. He wrote a book about his experiences

Heidelberg was the sixth of the men and women who comprised the Norfolk 17 to pass away.

Cecelia Tucker, Old Dominion University's assistant to the president for community relations, was teaching at Booker T. Washington High School in Norfolk when Heidelberg began attending Norview. She said they reconnected when Tucker began working at Old Dominion in the 1990s.

"I was surprised that he remembered me from that time," Tucker said. "He was brave, but also an incredibly passionate and dedicated servant of the community. He was a good friend to the University, and an even better man."