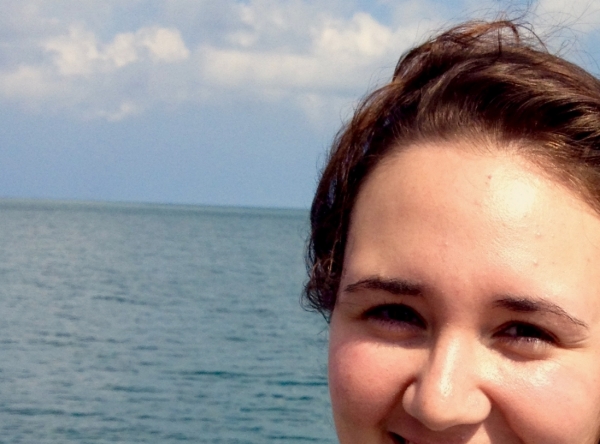 While relaxing last Saturday night on the deck of a research ship, Old Dominion graduate student Zuzanna Abdala wondered why the captain started scanning the Gulf of Mexico darkness with spotlights.

Abdala and five fellow oceanography students from other schools soon had their answer: a man was lost in the water.

"We were all just floored," said Abdala, who was on her first research cruise with Old Dominion assistant professor Dreux Chappell and laboratory technician Kim Powell. "Suddenly, we were tasked with finding a human being. It was sheer terror."

The Coast Guard recruited the research vessel Weatherbird II to join the hunt for a boater who had jumped into the Gulf more than an hour earlier. Abdala and her colleagues peered into the water, a mile or more from shore, for 30 frantic minutes when at last they heard cries for help.

"When you get a call like that, to start looking for a man in the water, you don't think you're going to find him," said Abdala, a recent graduate of George Mason who has been studying at Old Dominion for a month. "I'm still in disbelief everything played out the way it did."

The drama didn't end when the man, exhausted and dehydrated, was thrown a life preserver and pulled to safety, however. Abdala said his girlfriend and father, both of whom had also jumped into the water and required rescue, were reunited on the research ship to a flood of sobs and relieved screams.

"We were looking at that coast line," Abdala said, "and we were really far off."

The sudden excitement came toward the end of a four-day, collaborative cruise hosted by the University of South Florida. Joining Abdala were two students from South Florida, two from Florida State and another visiting from Italy.

But in another fortuitous twist, the researchers' work off of Tampa went so unusually well that the Weatherbird II was ahead of schedule for its final sample-station stop.

"We weren't even supposed to be in that area until the next morning," said Abdala, who was collecting Trichodesmium, a bacteria found in tropical waters.

But by late Saturday night, Abdala's Old Dominion partners Chappell and Powell had retired to their quarters. They didn't learn of the rescue until the next morning.

"We had been up since 3 that morning, so the principal investigators decided that sleep was a good plan," Chappell said with a laugh. "But this was the students' first cruise. They were excited. And it was a beautifully calm night."

At least, that is, until it came time to save a man's life.