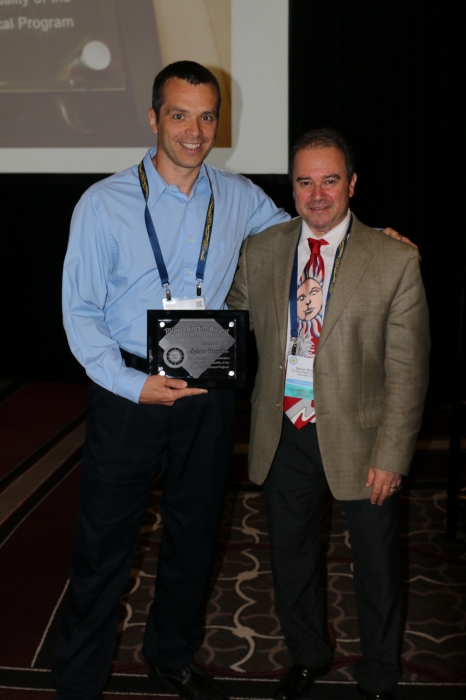 The work ethic of Old Dominion University solar energy researcher Sylvain Marsillac was recognized earlier this month at the 42nd IEEE Photovoltaic Specialists Conference, in New Orleans, where peers in his discipline lauded him with the "Paper Napkin Award."

The award is presented to one researcher at the conference every year, denoting the fact they are so dedicated to solar energy research that they are constantly developing ideas, sometimes jotting them down on paper napkins.

For those who know Marsillac, professor of electrical and computer engineering in Old Dominion's Batten College of Engineering and Technology, the characterization is a pretty accurate one.

At this conference, Marsillac was chair of the "thin films" research area, and supervised graduate student presenters Tasnuva Ashrafee, Grace Rajan and Shankar Karki. Meanwhile, Marsillac struck an agreement to team up with Japanese energy research consortium Solar Frontier, and held a meeting with German solar energy researchers (currently the world's leaders in the technology) to organize a future collaboration.

"The United States is reasonable in terms of funding for research, but in terms of policy in the U.S., we are still way behind," Marsillac said. In other countries, tax incentives and forward-looking policy makes investment in alternative fuels more cost-efficient. As a result, photovoltaic research in countries like Japan and Germany surpasses current U.S. technology.

German researchers have recently increased efficiency of solar cells to 21.7 percent, meaning that more than one-fifth of the total energy from the sun that hits solar cells is converted into electricity. This represents an increase of nearly 20 percent in the past few years, Marsillac said.

That is why meeting research groups from around the world (and making notes on paper napkins) is very important at gatherings such as the Photovoltaics Specialists Conference.

"These meetings are great places for networking, and to generate research ideas," Marsillac said. "This conference in particular attracts photovoltaic experts from around the world. I didn't expect to win the Paper Napkin Award, but the recognition from my colleagues in the discipline is very gratifying."

Since arriving in Norfolk, in 2011, Marsillac has received 18 grants totaling nearly $5 million, from top funding agencies such as the National Science Foundation and U.S. Department of Energy.

He is the director of Old Dominion's Photovoltaics Institute, which has as its mission researching and developing the science and engineering of solar cells and bringing them from the laboratory to industry. Research interests of the lab span the spectrum of photovoltaics, from fundamental science and engineering being performed at the nanoscale, to full system installation and testing.