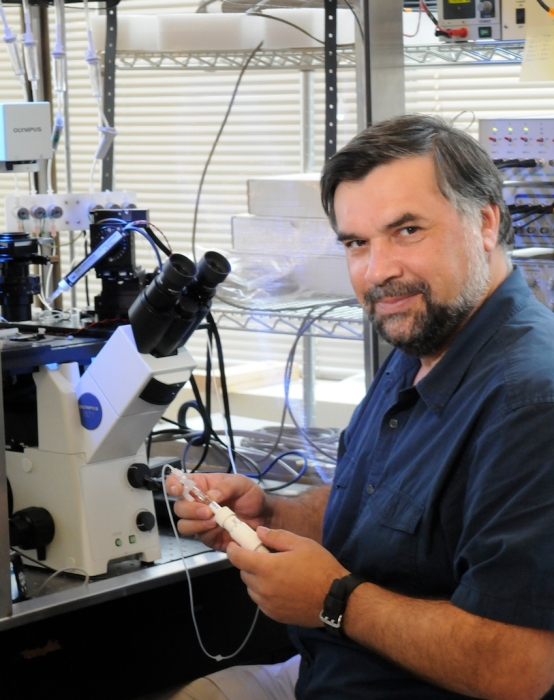 Andrei Pakhomov leads the multi-university team that secured a MURI grant from the Department of Defense.

Scientists from Old Dominion University's Frank Reidy Research Center for Bioelectrics lead a multi-university team that has received a $7.5 million MURI grant from the Department of Defense.

The prestigious MURI - Multidisciplinary University Research Initiative - is one of the largest awards received by the Reidy Research Center, said Richard Heller, the Center's director. He also noted the five-year grant affirms Old Dominion's acknowledged stature as a hotbed of bioelectrics research.

"The MURIs are very, very difficult to get," Heller said. "The fact that we are the lead institution really says a lot about how we are viewed and the work being done at Old Dominion."

Research Professor Andrei Pakhomov is the principal investigator of the group that includes three other Old Dominion researchers - Thomas Vernier, professor; Olga Pakhomova, research associate professor; and Shu Xiao, associate professor. Scientists from the Massachusetts Institute of Technology, Texas A&M University and the University of Nevada School of Medicine are also working within the group.

Pakhomov's team will focus on nanoelectropulse-induced electromechanical signaling of biological systems and electrostimulation.

Research shows inefficient bipolar pulses overlap into a monopulse that could allow for remote stimulation in a variety of applications, Pakhomov said.

"We want to study ultra-short pulses, how they interact with biological systems, the mechanisms, the consequences and the applications," Pakhomov said. "The concept is very attractive."

He added, "The goal of this MURI is fundamental research. The Air Force Office of Scientific Research wants to know more about how electric fields interact with tissues and such."

Old Dominion's MURI is included among 22 awards, totaling $149 million, awarded by the Department of Defense.

The MURI program supports research by investigative teams from more than one traditional science and engineering discipline in order to accelerate progress.

According to the Air Force Office of Scientific Research, MURI strives to advance defense research, technology transition and educate scientists and engineers in interdisciplinary areas important to national defense.

In total, 55 institutions are expected to participate in the 22 designated projects. A panel of experts selected the awards through merit review.

The Reidy Center itself, Heller said, was created in part by the University's first MURI grant received by professor Karl Schoenbach, as well as the generosity of Hampton Roads entrepreneur Frank Reidy.

Schoenbach's research focused on the use of pulsed power, or the application of powerful electrical surges, for extremely short periods of time, to manipulate biological cells, tissues and/or organisms.

He explored how high-intensity electrical surges can be used to remove diseased or unwanted tumors and cells. This manner of use of technology for medicine and biology was the first of its kind in the world.

His research led Schoenbach to develop the Center for Bioelectrics in 2002 as a research initiative within the Frank Batten College of Engineering and Technology, in partnership with the Eastern Virginia Medical School.