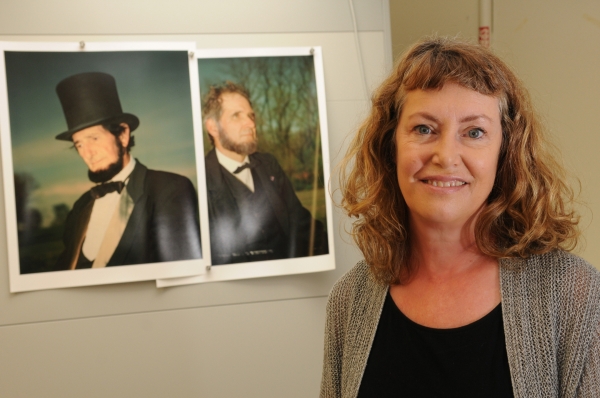 Associate professor of art Greta Pratt with portraits from her first Chrysler Museum of Art photo exhibit "Nineteen Lincolns" (below, print courtesy of Pratt). Her work is on display through July 5. 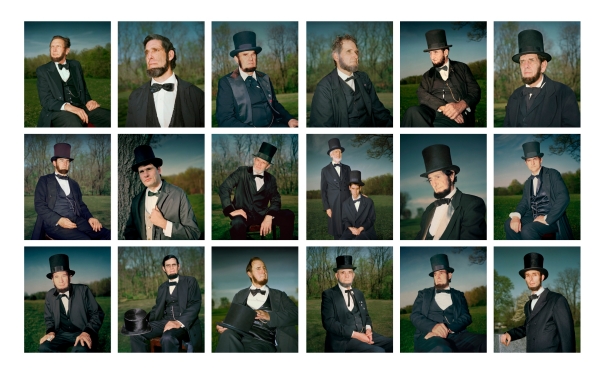 In her travels to capture the essence of American history and mythology, photographer Greta Pratt, associate professor of art at Old Dominion University, a decade ago happened upon The Association of Lincoln Presenters.

Intrigued, Pratt attended the Presenters' annual convention and took a group shot of nine Abraham Lincoln enactors for the back cover of her 2005 book, "Using History."

But Pratt sensed there was more to the men who, while not necessarily spitting images of the 16th president, otherwise lost themselves in their effort to publicly channel Lincoln's persona, triumphs and torments.

She returned the following year to shoot individual portraits that are emotive with piercing gazes and pensive stares associated with the first widely photographed president.

Those photos form the exhibit "Nineteen Lincolns" on display at Norfolk's Chrysler Museum of Art through July 5. Paired with "Shooting Lincoln," archival photos of the president owned by the Chrysler, the free show pairs the historic with the contemporary to reveal Lincoln's enduring humanity, said the museum's curator of American art, Alex Mann.

"We thought Greta's work was a really great opportunity to give extra life to the exhibit and bring Lincoln into the present," Mann said. "It is smart; it's beautiful; it's surprising. Everything about it says it's a great piece of art."

Also included via an iPad display are recorded readings of essays Pratt asked the presenters to write explaining their passion for personifying Lincoln at schools and historic enactments.

"Lincoln was not a perfect person," Pratt said. "But unlike, say, George Washington, who is portrayed as God-like, Lincoln is relatable on a human scale. In fact, he kind of embodies the main character trait of the American experience. That is, that anybody can come here, no matter your beginnings, and pull yourself up and really succeed."

Pratt, who has displayed "Nineteen Lincolns" since 2007, scoured her native Midwest in the mid-'90s for her first book of portraits, "In Search of the Corn Queen."

That project was preceded by a brief career as a news photographer that led Pratt to New York, although not before her journalism in Minneapolis was nominated for a Pulitzer Prize:

Pratt suddenly found herself amid a shootout on a downtown street between police and a man who had wrestled away an officer's pistol. Taking cover, Pratt kept her camera clicking until the man was subdued, capturing the entire incident -- the officer was shot, but survived -- on one roll of film.

Her heart was in her art, however.

Pratt earned her M.F.A. in 2005 at State University of New York at New Paltz and came to Old Dominion in 2007 to teach and pursue other artistic projects.

Those include: "The Wavers," a monograph of men and women paid by a tax service to dress as the Statue of Liberty and beckon passers-by; a series of video portraits of Jamestown Settlement interpreters; and the in-progress, "Far Away Pass," images of the Old and New West she hopes will become a book.

"What was interesting about being a news photographer was seeing history made firsthand," Pratt said. "That relates back to what I'm really interested in, how our story is told."

To that end, she said, "I think 'Nineteen Lincolns' is a metaphor for our country. They are all very different, but they understand something about what's important in our history."

More on "Nineteen Lincolns" can be found at the Chrysler Museum's website and Pratt's website which also includes her other work.