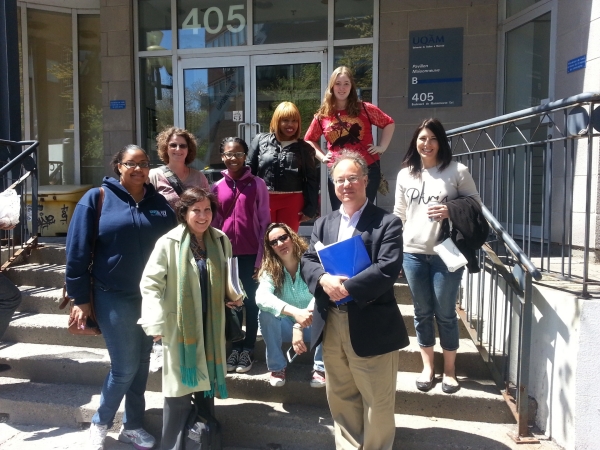 Professor Peter Schulman (right) led a group of ODU students in an immersion visit into French-Canadian culture in Quebec.

In "Casablanca," Humphrey Bogart and Ingrid Bergman will always have Paris. But after 17 recent days immersed in French-Canadian culture, seven Old Dominion students and their professor, Peter Schulman, know they'll always have Quebec.

This May, the Old Dominion group became the first Americans to study at the University of Quebec at Montreal as part of a two-year partnership between the schools, sponsored in part by the Quebec government.

"They want to plant the seeds for Quebec studies in America and develop a whole program to get people excited about Quebec," said Schulman, who chaperoned the traveling party of undergraduate and graduate students.

The program is part of Quebec's effort, Schulman said to show Americans that "not too far away you can have this complete French experience and learn about this French culture."

Steve Bell, director of Old Dominion's Study Abroad program, alerted Schulman to the availability of the $20,000 Quebec grant, and the two worked together throughout to facilitate the trip and activities that included daily French classes as well as extensive tours of Montreal and the Quebec province.

The Old Dominion representatives stayed in a dormitory on a campus that, to Schulman's surprise, had never hosted such an all-encompassing visit by American students.

Other universities in Quebec are popular destinations for visiting American students, but Schulman said the University of Quebec at Montreal is the most intensely French. All the better, he said, to advance the experience for his students, and even for himself.

"I had spent some time in Quebec, but I wasn't an expert on it," said Schulman, who added he is excited to know the trip will be repeated next summer.

"Those 2 ½ weeks were amazing," he continued. "It was a real pioneering effort. Really getting to know a city in its depth, every street and café, is a wholly different experience."

Despite varying levels of French-speaking ability in the group, Schulman said the students meshed seamlessly and emerged "10 times better" for being immersed in the Quebecois culture.

After intensive classes each morning with their host professor Djaouida Hamdani, the Old Dominion visitors took part in pre-planned tours of streets, museums and provincial landmarks, including a scavenger-hunt hike up Mont Royal in the middle of Montreal.

While Schulman said he hopes to soon host a similar immersion visit from French-Canadian students, Old Dominion graduate student April Eads wrote on her travel blog that Old Dominion's inaugural trip to Quebec was as fun as it was effective:

"After a lengthy conversation in French... Djaouida proudly announced, 'Avril, tu est Francophone!' ('April, you are French!') My French was much improved from the start of my trip, and there can be no better way to end a study abroad than such a declaration."