Filmmaking Students In On All The “Action” of Summer Movie Project 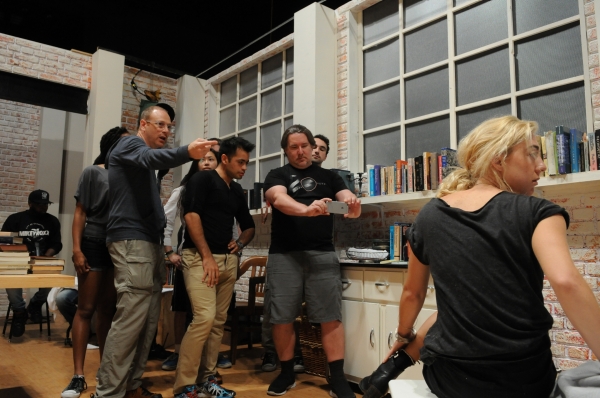 The dialogue among the Old Dominion film students on the Goode Theatre soundstage, set of the feature "18 Mornings," was clipped and to the point:

"Marker!" Robertson announced, the crack of her clapperboard splitting the air.

Then, after a long pause to be sure all was ready, came the call from guest director Vince DeGeorge of the University of Cincinnati:

Another scene between the film's two characters - played by paid professional actors Dietrich Teschner and Jaclyn Marry, who wrote the script - was underway.

"The students are doing everything," said assistant professor David Mallin, who conceived the movie for his "Feature Film Production" summer class and serves as the cinematographer.

"This is a six-credit, all-in project," he said. "And it's a learning environment. The students can make mistakes here that in the real world people wouldn't tolerate."

The full-length feature is a "workshop" project for the class' 11 students. It was given birth after Mallin met Marry, an actress from Los Angeles, at the Cannes Film Festival.

Mallin said he was looking for a condensed, one-set script to produce with DeGeorge; they did a short film a few years ago when Mallin taught at Virginia Tech and DeGeorge was a graduate student.

"I started telling Jaclyn how much I'd love to do something with one room, two people, a very limited context," Mallin said. "She said, 'You're not going to believe this, but I'm here trying to pitch this script that's two characters and one room.' "

Mallin and DeGeorge enlisted another friend, Kathleen Moriarity, a professional production designer, to oversee the students' build-out of the set, which is an apartment bedroom. It's there that the characters "Jackson" and "Sofia" are seen one morning a month over 18 months as their relationship unfolds.

"They are being extremely thorough in teaching us to be thorough," said Fields, who aspires to be a director and asked to be DeGeorge's first assistant. "This is right in the pocket for me. They taught us well in class, but being here, dealing with the crew and actually doing the shots is a million times better."

As DeGeorge and Mallin drew up those shots, Fields jotted their chronology into a notebook. Other students held the boom microphone over scenes, operated the camera, adjusted props on the set, and took iPhone screenshots of DeGeorge's monitor to assure scenery and wardrobe continuity from scene to scene.

That professionalism is also what impressed senior Sergio Lorenzana, a camera operator and assistant production designer for the film that will wrap up 15 days of filming June 22.

"With our student films, the actors are just our friends, and the script is something we wrote overnight," Lorenzana said. "There was a lot of pre-production time spent with this. It took two weeks to build the set. This is a legitimate feature."

Mallin said he's not sure what will become of the final product once DeGeorge finishes the editing. Originally a workshop product not intended for public viewing, the film is turning out so well Mallin said he and DeGeorge are reconsidering.

At the least Marry will have a produced script. She and Teschner will have footage and Internet Movie Data Base entries for their resumes. And the Old Dominion students will have top-quality experiences to draw upon when they have the chance to bring their own artistic ideas to life.

"This is a real collaborative environment," said Steven Crocker, the sound man. "Vince hears everybody out, and even if you have a bad idea, he'll walk you through why it's not a good idea and show you how to make it better."

DeGeorge said the opportunity for open input is why the workshop approach resonates so well.

"The students can learn all the technical things about how to make a movie," he said. "But you need to be on the set and seeing it happen, because every set and every relationship is different."

In the case of "18 Mornings,'' DeGeorge said what he has seen has been a pleasant surprise.

"The goal was to just workshop this script and see what we could get done, but it's going so well we recalibrated our schedule to get the whole thing shot," DeGeorge said. "We've gotten great work done."