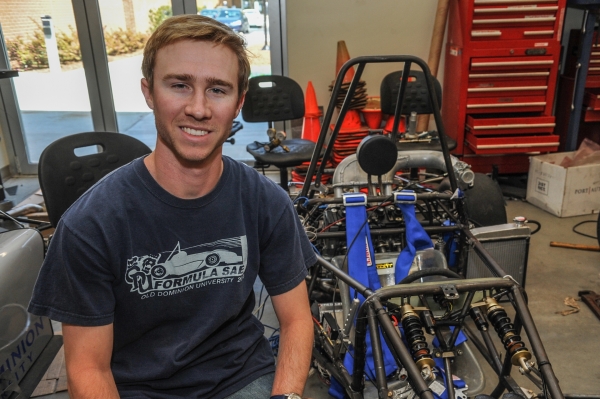 When Elliott Clowdis arrived at Old Dominion University in the fall of 2012, he joined the Formula SAE (Society of Automotive Engineers) team, because how fun would it be to build a small race car? Like other members of the team over the past decade, Clowdis quickly found out it's harder than it looks.

"There have always been roadblocks, obstacles to overcome. Ordering parts and them not arriving on time, bad luck happening," said Clowdis, a mechanical engineering student from Lynchburg.

His first year with the Formula SAE team, the team leader (who acts as project CEO) quit two months before the national competition.

"It was a miracle we got to the competition. We finished our car the day before we left." And how did that competition go? "It didn't go too well, honestly," he said.

But, two years later, Clowdis has just finished taking his turn as team leader. Despite the annual struggle to get ready for the competition, an enthusiastic group of Old Dominion students will took their Formula SAE car to Michigan International Speedway May 13-16, competing with more than 100 college and university teams in the international Formula SAE event.

Clowdis said none of the team members could have been prepared for what was in store. "Competition was a tough learning experience for the new members on the formula team this year," he said.

After arriving in Michigan and working all night to get ready for vehicle inspection by event judges, the team finished in the middle of the pack in "static" events like design, cost summary and a sales pitch to judges about the project.

Then, Clowdis said, the team faced a litany of other issues with further inspections - for structural steel bars, fuel system, noise control and braking - causing the team to work through a second night to get the car ready for final inspection in time for the competition's signature event - the endurance test.

"Team members were running from our paddock to the brake test location with every tool, bolt and part they could find in order to change the broken part with the new one," Clowdis said. "That was the most unpredictable day of the team's lives and my life as well. Everyone was filled with joy and enthusiasm from overcoming such odds in a short amount of time."

The obstacles weren't even done.

During the endurance race (held in a steady rainstorm) the Old Dominion car had battery issues, because dealing with the myriad other inspection problems had left the team unable to charge it the night before. The car completed only nine of the 22 laps of the race.

Still, Clowdis was tremendously proud of the work put forth by the team.

"It was a battle all week, with sleep deprived members working all night, battling every technical issue handed to us and overcoming obstacles thrown at us in all directions which in my mind really strengthened the team as a whole," he said. "Nobody knew we were capable of pulling off such odds thrown at us and with that much resiliency it made the team members believe in each other."

The trials and tribulations are actually pretty good life experience for the Batten College of Engineering and Technology students as they prepare for careers, said Colin Britcher, professor of mechanical and aerospace engineering and one of the team's faculty advisers.

"We've had a really enthusiastic and talented group this academic year, including a number of underclassmen who will form the core of future years' teams," Britcher said. "There are always hiccups, but that is part of the experience of managing this type of project with tight technical, cost and schedule constraints. The team is going to get there."

Two teams of engineering students spent the school year constructing vehicles in a laboratory in the new Engineering Systems Building on campus, having moved over from an outmoded garage space in a warehouse across Hampton Boulevard.

Kyle Gibson, a mechanical engineering technology student from Chesapeake, was project leader for the Baja SAE team, which designed and constructed a dune buggy for their national competition in Maryland, May 7-10.

Truthfully, the Old Dominion Baja SAE team has had its challenges over the years, too. Last year, the team safely got their vehicle to the competition in Wisconsin, only to have an axle break just before the judging started.

"We were pushing the car over to the tent where the signup takes place, and in our drivetrain, one of our axles popped out of place. It made everything fall apart," Gibson said.

After a few minutes of "Why us again?" team members got to work constructing a replacement drivetrain from scratch. They missed the first day of judging. But in the event's signature, cross-country rally race, Old Dominion finished in the top 25 percent of more than 100 teams.

That indefatigable spirit has been a constant of Old Dominion SAE teams over the years.

"It blows your mind at first. Teams from all over the world show up with huge teams, and full-fledged sponsorships painted all over their cars," Clowdis said. "But we love the underdog role. And we've been doing better with sponsorships this year."

The new laboratory space in the Engineering Systems Building was a bit of a game-changer for the two teams as well. There is a bit less space, but the facility is centralized, modern and well organized. And there has been one unexpected benefit, Clowdis said.

"Since we're in the main engineering building, they bring tours through here all the time. We'll be in here working on a Friday and all of a sudden Dean (Oktay) Baysal will be leading a tour of engineering executives through our lab," said Clowdis. "It helps with recruitment."