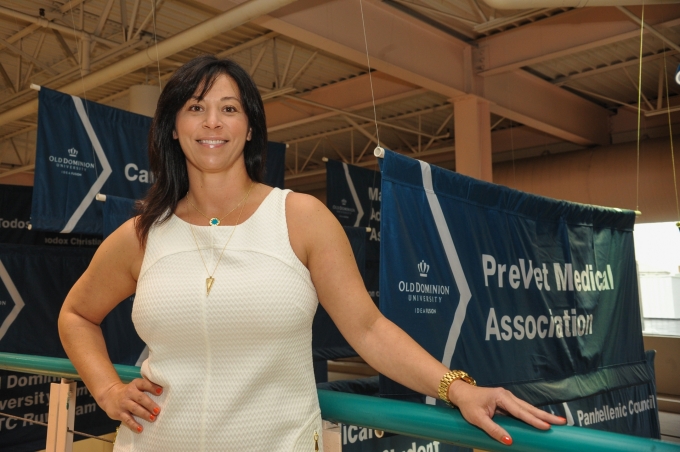 "There was a unique purpose in her energy that I usually do not sense or feel from new students," Stull said.

Lucas told Stull her story. Her husband Jeff, a Navy Seal, had been killed in action in Afghanistan in 2005.

"We actually got into a wonderful conversation about her journey as a military wife and mother and her dark moments of the loss of the love of her life and the father of her son," Stull said.

Her new student also spoke about the sense of purpose with which she was embarking on her dental hygiene degree. Four years later, Lucas will walk purposefully across the stage at Old Dominion's Ted Constant Convocation Center, to receive her bachelor's degree from the University.

"I'm so excited, but it's emotional as well," said Lucas, who will mark the 10th anniversary of her husband's passing on June 28.

Lucas was able to attend Old Dominion because of military support, as well as the "Folds of Honor" program, which provides educational opportunities for families of fallen soldiers.

"The resources have been wonderful, getting tuition and books paid for, as well as a stipend so I didn't have to work while going to school," Lucas said. "The support of the Naval Special Warfare Foundation has also been a tremendous help."

The past four years have been challenging enough. Lucas juggled the rigorous dental hygiene curriculum with the demands of raising her son Seth, now 14, as a single parent and widow.

"I have some guilt about missing out on many things over the past four years, like spending most of my time in my bedroom studying for finals at Thanksgiving. I know how precious lost time is. You can never get it back. I just hope that my son knows or will realize some day the sacrifice I made for us with letting go of some of our time," Lucas said.

She added that Seth has been tremendously understanding throughout the process, encouraging her to keep going when the demands felt too great. Seth's Godparents, Lisa and Paul Doyle, have also been life-savers for Lucas, whose own family is in Oregon.

Seth has his own challenges now to occupy him, adding a high school French course to his academic curriculum at Norfolk Academy, to keep up with the language he learned while he and his mother lived in France from 2007-11.

"I think I just needed a change. So we moved," Rhonda Lucas said. "When we came back, it was with a sense of purpose."

Lucas channeled her energy into the dental hygiene program. She will graduate with a 3.4 grade point average, and will start her master's degree at Old Dominion in the fall. Being a generation older than her primarily female classmates has also cast Lucas in a unique role - not quite a parent, but a classmate in whom students could confide.

"They treated me much like one of the girls, but they'll ask me for advice from time to time. I'm honored they think of me in that way," Lucas said.

Most of her classmates know of her strength, because they now know the story of how her husband died in Afghanistan. The tragic conflict was featured in the Hollywood movie Lone Survivor.

Being a military widow for the past decade has been hard for the Lucas family, with losses in the close-knit Seal community mounting as conflicts in the Middle East dragged on.

"It has been extremely trying. Our community is close and every loss is tragic. You compartmentalize so you can continue to move forward," she said.

Sharon Stull has seen that laser-like focus in her student. She has no doubt Lucas will reach her goals.

"Rhonda is and will always be a difference-maker," she said.