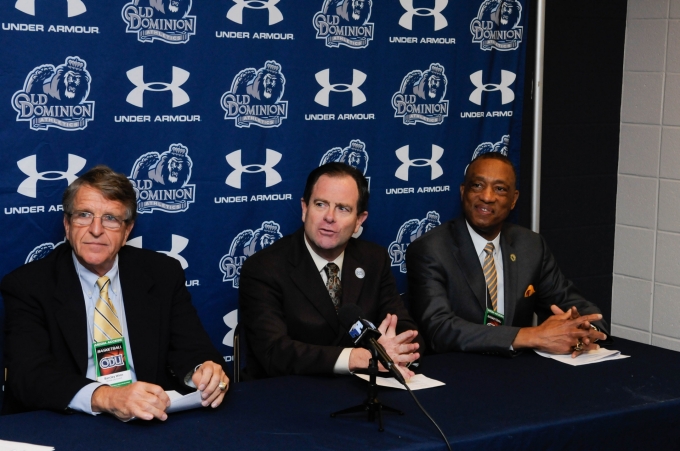 In conjunction with the first men's basketball game between Old Dominion University and Norfolk State University in 15 years, fans of the two schools will have a chance to participate in "We Feed Norfolk," a benefit for local food banks and charities.

Food and monetary donations will be collected at the Dec. 29 game at the Ted Constant Convocation Center to support the Foodbank of Southeastern Virginia and the Eastern Shore.

The event, which is co-sponsored by the local universities, the City of Norfolk and the Kam Cares Foundation founded by Seattle Seahawks football star Kam Chancellor, is aimed at helping the 12 percent of Virginia households where parents and caregivers struggle to provide meals for their families.

At the kickoff event for "We Feed Norfolk," held before more than 8,000 students from local elementary schools packed the Constant Center for the Lady Monarchs' fifth annual Education Day game, ODU President John R. Broderick said there is a strong tradition of service and giving at the University.

"Old Dominion is pleased to team up with our community partners who do such tremendous work to help local families," Broderick said. He noted that for the University's 85th year, he challenged members of the campus community to perform 85 hours of service during the school year.

"Events like "We Feed Norfolk" reflect the spirit of service that our students have always embodied," he said.

Norfolk State Athletic Director Marty Miller thanked President Broderick for the opportunity for NSU to participate in the event. "We are very excited to show our spirit and generosity, and renew our rivalry on the court," he said.

The event is being hosted just after Christmas, a time when stocks of food supplies in local food banks are typically very low.

Fans at NSU's Dec. 2 game against Mercy College and Old Dominion's Dec. 22 contest against Rhode Island will receive reusable "We Feed Norfolk" grocery bags as they exit those games. Fans who return those grocery bags, with donated foodstuffs, will receive $10 admission to the Norfolk State-Old Dominion game, a $7 savings per ticket.

The food drive kicked off during the annual Education Day game, which hosted students from 33 Norfolk Public Schools in a noisy atmosphere of basketball excitement.

Representatives of each of the 33 schools that attended Wednesday's game brought bags of food to donate, which will be added to the collection total for the "We Feed Norfolk" event.

In the game, the Lady Monarchs snapped their five-game losing streak and defeated Loyola, 64-41.