ODU State of the Commonwealth Report Launched at Williamsburg Event 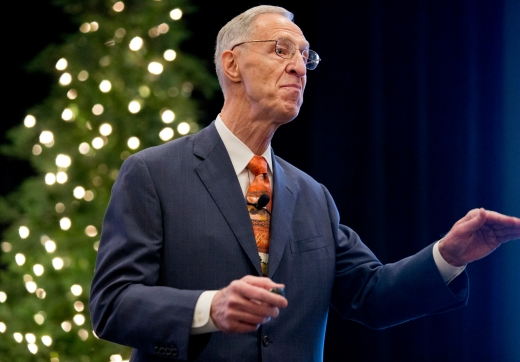 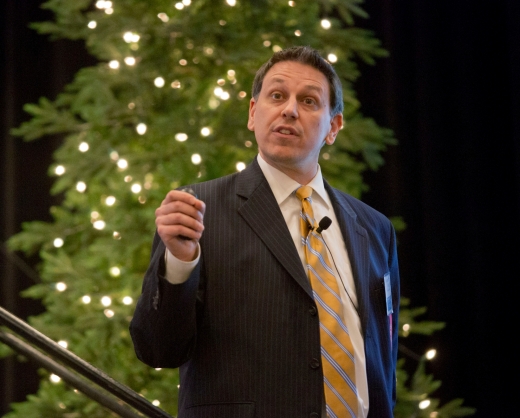 Before a capacity crowd of 700 in downtown Williamsburg, Old Dominion University economists James V. Koch and Larry "Chip" Filer painted a picture of a sluggish Virginia economy, but with strong fundamentals for future growth.

Leading off the first annual report, Koch, the Board of Visitors Professor of Economics and President Emeritus, sought to reassure the audience of statewide business leaders about the mixed economic news they were about to receive.

"We're going to tell you, despite what you are about to hear, why it's good to be a Virginian right now," Koch said.

Before Filer, associate professor of economics in the Strome College of Business, presented data that show the Commonwealth lagging behind much of the United States during the past two years, Koch pointed out that in median income figures adjusted for the cost of living, Virginia leads the U.S. mid-Atlantic.

"Folks, spendable income is much higher in Virginia than anywhere on the Atlantic Coast. You put those together and the Commonwealth is not such a bad place to be right now," Koch said.

"A comprehensive report that looks at our current situation but also looks to the future is something that is useful to all Virginians," he said. "President John R. Broderick and the ODU team have done a great job collaborating with researchers at other universities across the state."

Filer's presentation, which focused on the current and future economic outlook for Virginia, featured work done by researchers at George Mason, Virginia Commonwealth University and other Virginia universities.

While pointing out that during the past two years, Virginia's almost-zero growth would rank it 47th out of 50 states in the U.S., Filer suggested as uncertainty around issues such as sequestration get worked out, the state is poised to rebound.

"I could describe the Virginia economy as a Shakespearean tragedy, but in reverse. Bad news today, but looking at better days in 2015 and 2016," Filer said.

The State of the Commonwealth report is an outgrowth of the State of the Region report for Hampton Roads, which Koch has led since 2000, and which was delivered in October in Norfolk, Virginia Beach and Hampton. The two reports are produced by Old Dominion's new Center for Economic Analysis and Policy, a think-tank based in the Strome College of Business that undertakes a wide range of economic, demographic, transportation and defense-oriented studies.

Subsequent State of the Commonwealth addresses are scheduled for Dec. 9, in Roanoke; Dec. 10, in Northern Virginia; and Dec. 16, in Lynchburg.

For more information, or to access a PDF copy of the report, visit the State of the Commonwealth Website or contact James V. Koch at jkoch@odu.edu.