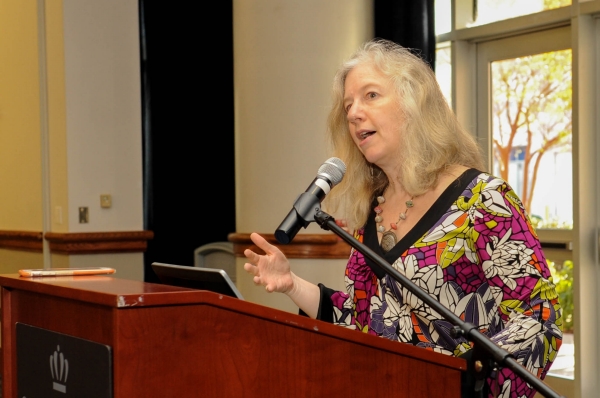 Robin Barnes, executive vice president and COO of Greater New Orleans, Inc., told forum attendees in her address that since Hurricane Katrina a decade ago, 80 companies have relocated to New Orleans because of investments in resilience and infrastructure.

Old Dominion University hosted "Collaborations for Community Resilience," a day-long session on Dec. 10 at the Ted Constant Convocation Center, which provided an update on multidisciplinary projects being tackled by the area's universities, governmental agencies, military and nonprofit partners.

"Every time we bring together our community, academic and government partners I'm encouraged by our collective progress," said Emily Steinhilber, assistant director for coastal resilience research at the University. "While we have many challenges ahead as we continue to thrive with the water in Hampton Roads, our partners have shown that the only way forward is through collaboration and communication not only within Virginia but with other regions."

In that spirit, guest speakers from South Florida, New Orleans and Washington, D.C. shared their experiences of the essential program needs to nurture and grow resilience across communities.

"In my experience, these collaborative conversations about coastal resilience are coming together too slowly," he said. "That's why it's so heartening to attend a session like this, with so many participants sitting down together, sharing what they have learned."

Old Dominion's multidisciplinary sea level rise research, mitigation and adaptation efforts stretch back decades, but have accelerated in the past five years, starting with the creation of the University's Climate Change and Sea Level Rise Initiative in 2010.

An update was provided at the forum about the Hampton Roads Intergovernmental Pilot Project, convened in 2014 by Old Dominion to consider a "whole of government, whole of community" approach to sea level rise mitigation and adaptation.

In the panel "Thriving with Water," participants including Christine Morris, chief resilience officer with the City of Norfolk; and Adam Thiel, deputy secretary of Public Safety and Homeland Security for the Commonwealth of Virginia, spoke about the collaborative resilience grant application to the U.S. Department of Housing and Urban Development (HUD).

The application led by Virginia's Department of Housing and Community Development has advanced to the final round of the National Disaster Resilience Competition (NDRC), sponsored by HUD and the Rockefeller Foundation.

The NDRC makes a total of $1 billion available to communities that have been struck by natural disasters in recent years. By advancing to the final stage of the competition, the Virginia proposal is eligible for up to $500 million in federal funds to help communities recover from storm events, and prepare for future disasters.

Robin Barnes, executive vice president and COO of Greater New Orleans, Inc., told forum attendees in her address that since Hurricane Katrina a decade ago, 80 companies have relocated to New Orleans because of investments in resilience and infrastructure.

Barnes said she sees similarities between New Orleans and Hampton Roads, particularly the fact that land in the two regions is sinking, while adjacent seas are rising.

"Our problems come from different sources, but how we approach them has to be unified," she said.

Local participants across the sea level spectrum in Hampton Roads will gather next at Engineering, Design and Implementation of Natural Coastal Infrastructure Solutions in Hampton Roads, a workshop set for Feb. 9-10 in Norfolk.