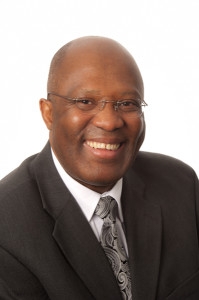 An accomplished and celebrated teacher, researcher and leader in health services administration, Agho was selected through a nationwide search conducted by a 16-member committee chaired by Ellen Neufeldt, vice president for student engagement and enrollment services.

"I am thrilled to welcome a scholar and research leader of Dr. Agho's caliber to Old Dominion," President John R. Broderick said. "His background as an educator and a developer of academic programs is truly exceptional, as is his commitment as an administrator to student success and campus diversity and inclusion.

"Dr. Agho has excelled as a dean at two urban universities, demonstrating creative vision to conceive and successfully execute strategic plans. I am excited that we will now move forward under Dr. Agho's inspiring academic leadership."

Broderick thanked Interim Provost Chandra de Silva for his service in the position since June, when former provost Carol Simpson stepped down. De Silva has announced his retirement from Old Dominion at the end of the current academic year. Broderick also congratulated Neufeldt and the search committee for their successful work.

Neufeldt said the committee was immediately impressed by Agho's proven record for guiding undergraduate and graduate academic and online programs from conception to robust health. Agho, who earned his doctorate in hospital and health administration in 1989 from the University of Iowa, was appointed a dean at University of Michigan-Flint in 2001. He took the same office in 2008 at IUPUI, a 30,000-student research university ranked in the top 20 by U.S. News and World Report for its undergraduate teaching and graduate nursing programs.

"Dr. Agho has shined in academic leadership positions for more than 20 years," Neufeldt said. "He is an educator of vision and achievement who will serve Old Dominion well as an inspiring academic leader and advocate."

As a research principal investigator or project director, Agho has received five funded grants worth $1 million or more for health careers opportunity programs. Included is a $1.9 million grant for the Indiana University Health Careers Opportunity Program from the Bureau of Health Professions, Health Resources Services Administration. In Michigan, he secured $1.2 million from the C.S. Mott Foundation to establish the Urban Health and Wellness Center to provide primary care and physical therapy services to underinsured local residents. And he secured an additional $2.4 million to design and implement programs aimed at increasing the enrollment of minority students in nursing and health science programs.

As a professor, Agho received numerous honors for teaching excellence at Sangamon State University - now the University of Illinois at Springfield - including the Meritorious Teaching Award in 1992. At Florida A&M University, Agho was named Teacher of the Year in 1999, recognized for Outstanding Research Achievement by the National Historically Black Colleges and Universities Research Network in 2000, and named Advanced Teacher of the Year in 2001.

At IUPUI, Agho led the development and implementation of two strategic plans through which the school established new undergraduate and graduate professional programs. Agho established faculty, staff and distinguished alumni awards, and adopted policies that supported efforts of faculty to conduct research and secure external grants. He increased alumni donations to fund student scholarship and strengthened the school's commitment to diversity and the cultural competency of faculty, staff and students.

Agho also established bachelor's and master's degree programs in health sciences (online and on-campus), and a master's of physician assistant studies. Additionally, he created an undergraduate certificate program in gerontology, as well as undergraduate and graduate certificate programs in global health and rehabilitation studies, and rehabilitation and disability. Annual average research funding at IUPUI increased during his tenure from $500,000 to $1.6 million, and the minority student population at IUPUI increased from 6.5 percent to 18 percent.

"It is a profound honor to be appointed as the provost and vice president for academic affairs at Old Dominion University," Agho said. "What made this position most attractive to me is ODU's long-standing commitment to academic excellence, cutting-edge global research, online education, student success, diversity, and community engagement. I look forward to serving ODU and joining President Broderick and campus leadership to elevate the scholarly work of our faculty, advance the success of our students, and enhance the economic vitality of the Hampton Roads region."

"Austin Agho has excelled in all three traditional academic areas," said Interim Provost Chandra de Silva. "Austin's composure and readiness to work collaboratively will be an invaluable asset to our university."

Broderick added, "Dr. Agho has extensive experience as a proponent of innovative research, interdisciplinary education and online programs. His track record for the development, implementation and assessment of academic programs clearly stood out."

Broderick thanked the members of the campus-wide search committee for their service. Those members are:

Batten College of Engineering and Technology - Andres Sousa-Posa, associate professor of engineering management and systems engineering and former member of the Faculty Senate; and Rick McKenzie, professor and chair of modeling, simulation and visualization engineering;

Student - Bo Ram Yi, doctoral student in GPIS and former student representative to the board of visitors.