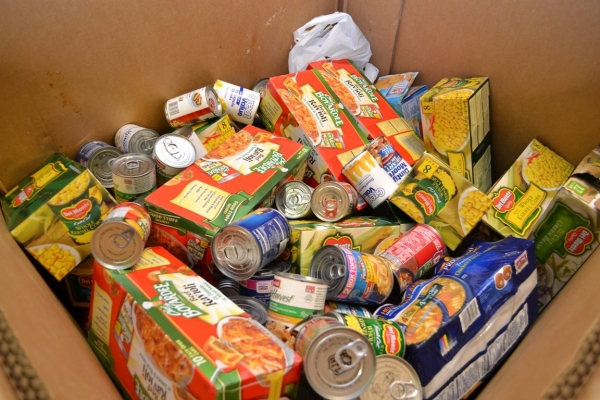 The payoff was nearly 300 pounds of food and additional donations made to the Foodbank of Southeastern Virginia and the Eastern Shore.

"I'm very proud of what OEAS does to help others," said department chair Rodger Harvey. "We had folks drop off goods at the office during the week, and others brought items to the party. Instead of a swap, we made the effort outward."

OEAS graduate students initiated the drive by distributing throughout the department the food bank's menu of desperately needed non-perishable items, including canned meats, fruits and vegetables, and baby formula and supplies.

They organized the collection of all donations, went shopping with money contributed, and personally delivered everything to the food bank.

"It was a great idea and a great success," Harvey added. "OEAS collected over 282 pounds of food, together with several generous monetary donations. That translates to more than 300 meals for the neediest in our community."

The OEAS effort is the most recent example of the focus placed on public service by the Old Dominion community.

Biology lecturer Rachel Schroeder also leads an urban farming "Classroom to Table" project with students that grows fresh vegetables at three locations in Norfolk for donation to the food bank.

Representatives from the 33 Norfolk public schools that attended contributed bags of food to donate to "We Feed Norfolk."

Before that game, ODU President John Broderick announced a "We Feed Norfolk" partnership with Norfolk State University, linked to the first men's basketball game between the schools in 15 years.

Fans of both teams are asked to fill "We Feed Norfolk" bags to bring to the Dec. 29 game at the Ted Constant Convocation Center. Those who donate bags will receive $10 admission to the game, a $7 savings per ticket.

The food campaign is co-sponsored by the universities, the City of Norfolk and the "Kam Cares Foundation" established by Seattle Seahawks football star Kam Chancellor of Norfolk.

Old Dominion is pleased to team up with our community partners who do such tremendous work to help local families," said Broderick, who noted that, for the University's 85th anniversary, he challenged members of the campus community to perform 85 hours of service this school year.

"Events like "We Feed Norfolk" reflect the spirit of service that our students have always embodied," Broderick said.