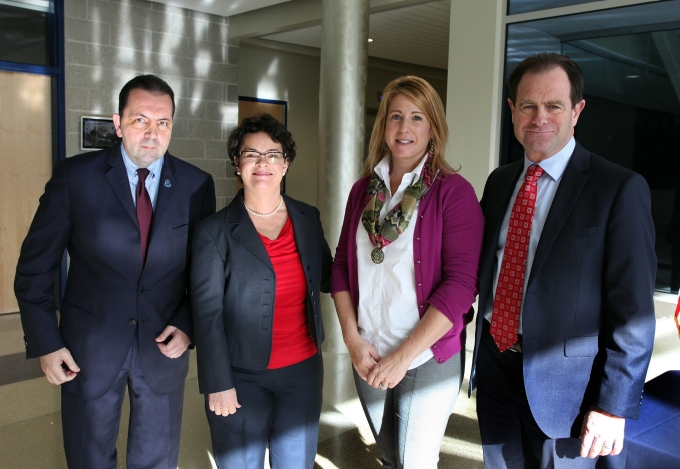 Old Dominion University and Newport News Shipbuilding (NNS), a division of Huntington Ingalls Industries, have signed a far-reaching memorandum of understanding to collaborate in areas of research, design, testing and experimentation.

The document, signed Dec. 21 in the Engineering Systems Building on the Old Dominion campus, builds on a decades-long alliance between the University and the shipbuilder, in engineering particularly, but also across other academic departments.

"This memorandum of understanding represents a commitment to collaborate on research and design," said Old Dominion President John R. Broderick, who noted areas such as power and energy technologies, platform design technologies including surface and sub-surface, and modeling and simulation are of significant shared interest between the institutions.

"It's equally important for me today to share the podium with Jennifer Boykin, who is a pioneer for women in the engineering profession and has been very involved with us on our campus."

Boykin, vice president for engineering and design with Newport News Shipbuilding, said in her remarks that the company takes tremendous pride in its long-standing partnership with the University. "We are excited about our relationship going forward with Old Dominion," she said.

Boykin said in order for NNS to meet its challenges, it requires a steady stream of engineers, trained in state-of-the-art engineering disciplines. Said Boykin: "We find that talent at Old Dominion University."

Part of the impetus for the formalized MOU between Old Dominion and Newport News Shipbuilding was the creation in 2014 of the Naval Engineering and Marine Systems Institute (NEMSI) in the Frank Batten College of Engineering and Technology.

Led by Jennifer Michaeli, assistant professor of engineering technology, NEMSI has raised $3 million in research grant funding in the past 18 months from Navy sponsors across a broad spectrum of faculty researchers.

Over the past year, Old Dominion has developed a marine engineering undergraduate minor that is offered in distance learning format starting in January 2016 to reach a broader student base including Navy professionals and those currently employed in the marine industry.

ODU is also consistently at the top of the list of universities providing students for highly competitive summer internships and permanent hiring positions at NNS. As well, NNS professionals are actively engaged across all engineering departments to serve on industry advisory boards as well as serving on the Batten College Dean's Advisory Board and Education Foundation Board.

The areas of collaboration between Newport News Shipbuilding and Old Dominion extend far beyond engineering, said Morris Foster, the University's vice president of research. Foster hopes the MOU is the inspiration for further developing those ties.

"It's a relationship we hope to grow, not only in the college of Engineering, but across the University," Foster said.

Founded in 1886, Newport News Shipbuilding has carried on the legacy of American shipbuilding over the past 129 years, building some of the most famous ships in American naval history with a diverse workforce of craftsmen and engineers.

NNS is the sole designer, builder and refueler of U.S. Navy aircraft carriers and one of two builders of U.S. Navy submarines. With approximately $4 billion in revenues and more than 20,000 employees, NNS is the largest industrial employer in Virginia and the largest shipbuilding company in the U.S. In 2011, NNS became a division of Huntington Ingalls Industries after being a part of Northrop Grumman since 2001.