From Iraq to ODU: America Luna's Experience as a Student Veteran Makes Her Want to Help Others 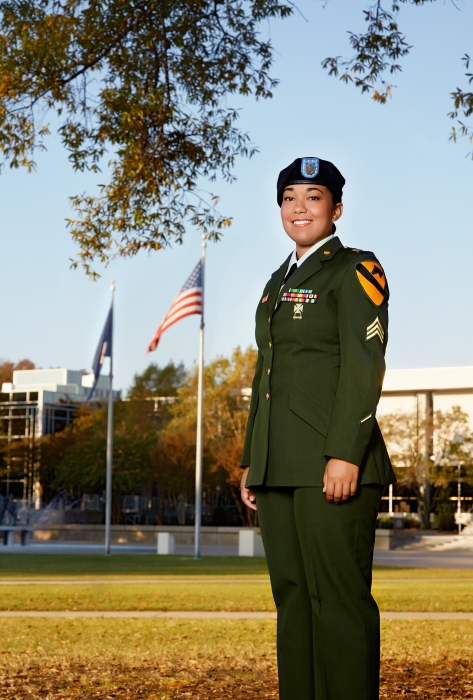 America Luna will receive her master's degree in Higher Education. Below, Luna introduced Secretary of State John Kerry during his visit to Old Dominion University in November 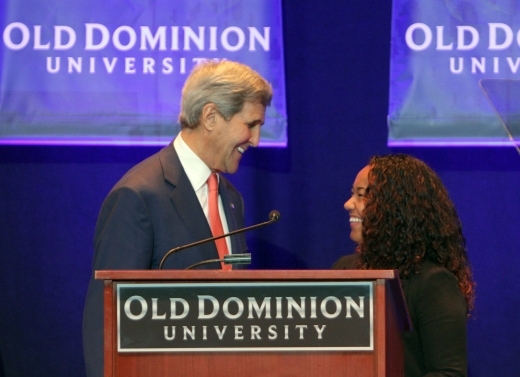 Her four-plus years at Old Dominion is coming to an end. America Luna will receive her master's degree in Higher Education from the University on Saturday, Dec. 12.

But the 29-year-old Brooklyn, N.Y. native has been shaped so profoundly by her experience as a student veteran that she would like to make a career helping future students with similar stories.

"I am actively seeking employment to help veterans on college campuses. I'd love to work at a military center at a university," she said.

Across a crowded courtyard or a full class, she can spot them immediately. A little older perhaps, but also a study in contrasts.

Student veterans carry themselves with an assuredness from having tackled different challenges. Yet at the same time, Luna sees the hesitancy as they try to navigate the university environment. This isn't the structured life of the military member, with specified tasks and the established chain of command.

She experienced herself how going back to school poses new hurdles for student veterans. A generation of college students can be huge assets to their campuses if they can successfully integrate, and Luna wants to help.

"I didn't want to be one of those military members who went to college and only socialized with other military," said Luna. "I found opening up to other experiences helped me get out of my military shell, and made my time here a lot more meaningful."

Luna came to Old Dominion following close to a decade of service as an Army intelligence collector. She served two deployments in Iraq gathering intelligence, in 2006 and 2009.

"It was a totally different experience each time," said Luna, whose second deployment to more peaceful southern Iraq involved far more outreach into communities. Given what has happened in the Middle East since her second deployment, "it was probably the calm before the storm," Luna said.

After coming to Norfolk to attend Old Dominion, Luna felt instantly comfortable because of the large presence of fellow military members and veterans on campus.

But she still struggled with the transition, reaching out to organizations such as the Student Veterans Association for advice and support. "I found there were a lot of veterans having the same issues I was having," she said.

The kinship was invaluable, but Luna found she had her "true breakthrough" on campus when she joined other student organizations. She tjoined a sorority, and made non-military friends through other clubs and volunteer projects.

"You have to be patient with people," Luna said of her interactions with non-military veterans. "These are not their experiences, so you have to pull back if someone asks a question that might be seen as insensitive. At the same time, I've found students want to know about our experiences, and I've tried to facilitate that understanding."

The interest in making connections outside the military led Luna to her master's degree program, where she one day hopes to work with campus veteran populations, helping with practical and emotional aspects of the transition to student life.

Luna said in her four years at Old Dominion, the University has made great strides, and deserves the "military friendly" designation it holds from the national publication Military Times.

"Since I've been here, they've done a great job with bringing more awareness," Luna said, especially the creation of a Military Connections Center, to reach into every part of the University to incorporate military populations into student life.

Col. Bill Brown (Ret.) director of Old Dominion's Military Connections Center, said Luna has been a steady fixture in the University's student veteran population for the past few years, working in different departments on campus.

"America knows first-hand what it means to be a combat veteran and the challenges that veterans face when they return to the civilian world and enter college," he said. "Her experiences caused her to want to help others going through the same challenges and I am sure she will always be someone who will go out of her way to help others."

Among the high-profile tasks Luna has taken on are serving as emcee for the University's September 11 event, and introducing Secretary of State John Kerry during his address about climate change and national security at Old Dominion in November.

"That was a great experience. I was really nervous, but Secretary Kerry made me feel totally relaxed. He was joking with me on stage before I introduced him," Luna said.

Receiving her master's during Saturday morning's Commencement ceremony will be the culmination of Luna's college experience, but she hopes it's not the end of her time on campus.