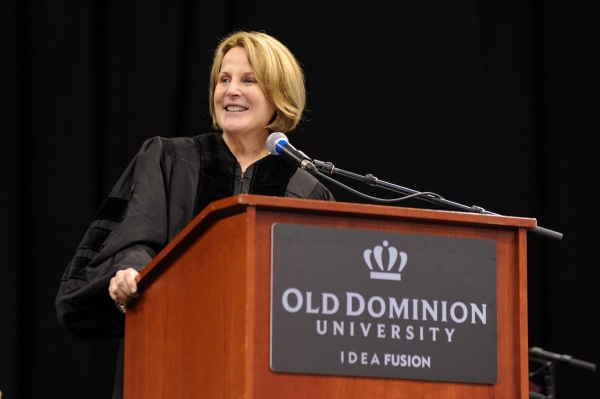 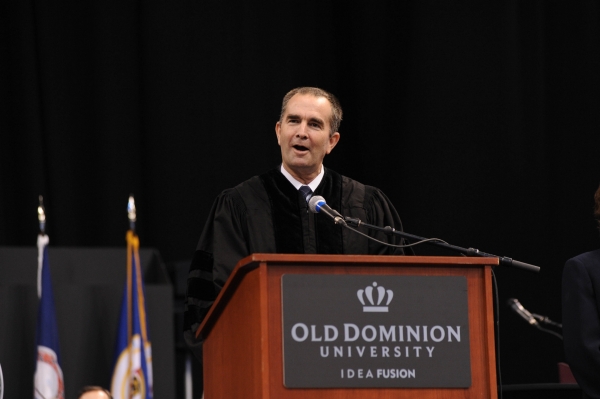 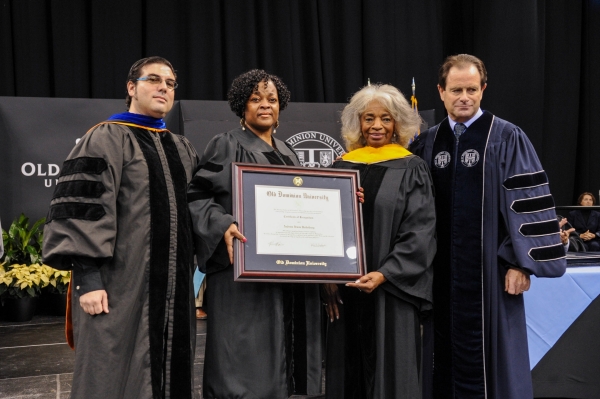 An unseasonably lovely December day was matched by the sunny spirit of more than 1,600 graduates of Old Dominion during the University's 123rd Commencement exercises on Saturday, Dec. 12.

During the ceremonies, bachelor's, master's and doctoral graduates and their friends and families heard words of wisdom from two esteemed speakers at the morning and afternoon ceremonies.

Alice C. Hill, a retired federal judge who now serves as senior director for resilience policy on the White House National Security Council (NSC), spoke at the 9 a.m. ceremony to graduates of the Frank Batten College of Engineering and Technology, College of Sciences and Darden College of Education.

Dr. Ralph Northam, a Norfolk pediatric neurologist who serves as Virginia's Lieutenant Governor, spoke at the 2 p.m. ceremony to graduates of the College of Arts & Letters, Strome College of Business and College of Health Sciences.

Hill, who leads a team responsible for developing federal policy, including resilience to the impacts of climate change and sea level rise, congratulated the graduates and urged them to go "all in" with their future endeavors.

She quoted Winston Churchill's famous words in wartime crisis as inspiration: "'I have nothing to offer but blood, toil, tears and sweat.'" Hill said. "There is nothing more profound than that, because that is all that we can give, ourselves fully engaged, working hard, helping a cause that truly matters."

Hill has advised the White House Pilot Project on Sea Level Rise that is headquartered at Old Dominion, and she noted climate change as an urgent cause demanding unyielding attention and effort.

"Just as Winston Churchill did not choose the issue of his time, none of us chose the cause of fighting climate change," she said. "It is, however, one of the most important issues we have to confront."

Hill also reminded the graduates of McDonald's luminary Ray Kroc's opinion of luck: "'The more you sweat, the luckier you get.'

"No matter what career path you follow," Hill continued, "I urge you to fully engage. Go out and sweat."

Northam, a Children's Hospital of The King's Daughters pediatric neurologist and former Virginia State Senator who was elected to the office of Lieutenant Governor in 2013, began his address by lauding the accomplishments of the University as a whole.

"It has been just amazing to me to watch the growth of ODU," he said. "It is a tremendous asset not only to Norfolk and Hampton Roads, but also to the Commonwealth of Virginia."

Northam, who has been in Virginia's General Assembly since 2008, quipped, "A lot of people ask what does a Lieutenant Governor of Virginia do, including my wife."

Northam said besides presiding over the Virginia Senate, he works closely with Gov. Terry McAuliffe at efforts to grow the Virginia economy, including key investments in the "STEAM" fields - science, technology, engineering, arts and math.

"Over the next three years, the jobs in those fields are expected to grow by 10 percent per year," he said. "I know that many of you students graduating today will be taking important jobs in those fields, in areas like cybersecurity, information technology, bioengineering. This is a very exciting time to be entering the job market."

Northam closed his speech by offering three pieces of advice.

The Lieutenant Governor urged graduates to find ways to give back to their community. "You will always be able to find opportunities to help those who are less fortunate," he said.

"Your parents love you very much, and they are very proud of you," Northam said. "I ask you that once a week, I know all of you have cell phones, pick up that phone and call them, especially your mother. And thank your parents. Tell them how much you appreciate them, and how much you love them."

Prior to joining the NSC and the administration of President Barack Obama, Hill served as senior counselor to the Secretary of the Department of Homeland Security (DHS). In that position, she provided advice and counsel on broad public policy issues directly impacting the nation's security. Hill also created and served as the first chair of the Blue Campaign, an internationally and nationally recognized program to combat human trafficking.

After attending Eastern Virginia Medical School, Northam served eight years of active duty in the United States Army, rising to the rank of Major. Upon his return from treating soldiers during Operation Desert Storm, Northam began practicing pediatric neurology at the children's hospital, in Norfolk. In addition to those duties, he serves as assistant professor of neurology at Eastern Virginia Medical School and has 10 years of volunteer service as medical director for the Edmarc Hospice for Children in Portsmouth.

As a state senator from 2008-2013, Northam counted among his accomplishments working to prohibit smoking in restaurants, protecting youth athletes who sustained concussions, improving the health of the Chesapeake Bay and shielding first responders from communicable diseases.

His top priorities as lieutenant governor include economic development, women's health, early childhood education and development and meaningful mental health reform. In this role, Northam presides over the Virginia Senate.

Heidelberg was a member of the Norfolk 17, the first group of African American students admitted in 1959 to Virginia's newly desegregated public schools.

Facing discrimination, Heidelberg excelled in the classroom and on the football field for Norview High, and continued to serve as a role model for generations of black student leaders.

Heidelberg died in July, a few credits short of his master's degree. His master's thesis, which Heidelberg was writing under the direction of Avi Santo, associate professor of communication and theatre arts, explored how local media coverage of his high school sports career told a story about desegregation that overlooked the racism he and other black athletes encountered in favor of celebrating their individual talents.

"In many ways, this sadly unfinished work epitomizes what made Andrew Heidelberg such a remarkable human being," Broderick said, in presenting a certificate of academic achievement to his widow Luressa. "I will miss my phone calls with Andrew. He was a hero to many, but a great human being to all who knew him."