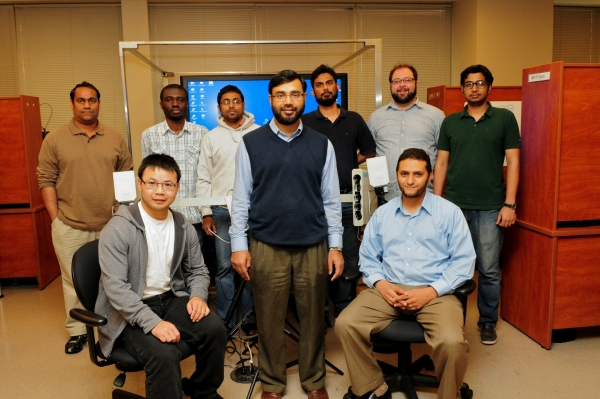 Khan Iftekharuddin (center) and his students at the ODU Vision Lab

A team of student researchers from the Old Dominion University Vision Lab and the Virginia Institute of Vision Analysis placed fourth in a recent worldwide competition involving sophisticated methods of separating brain stroke lesions among other similar brain tissues using computer vision, known as segmentation. The ODU finish was the highest among American universities.

The competition, held as part of the Medical Image Computing and Computer Assisted Interventions (MICCAI) conference in Munich, Germany, pitted 14 teams of student researchers from around the world.

Teams competed in the emerging field of automatic segmentation of ischemic stroke lesion (ISL) volumes. These lesions are generated in the brain just before an acute stroke develops. This experimental technique separates magnetic resonance imaging (MRI) sequences so they can be analyzed for the development of these lesions.

The Old Dominion team was led by Syed Reza, a Ph.D. student in electrical and computer engineering, whose research interest includes computational modeling and medical image analysis that focuses on automatic segmentation and grading of abnormal lesions and brain tumors in MR images.

Reza's adviser is Khan Iftekharuddin, chair of the Department of Electrical and Computer Engineering and director of the ODU Vision Lab and VIVA. The Vision Lab has a worldwide track record of success in these competitions, placing third and fourth in recent brain tumor segmentation challenges organized by NCI and MICCAI in Japan and Boston.

"This is exciting work, and we are proud at the Vision Lab and VIVA to be working on a project that could help contribute to the clinical challenge of stroke detection and prevention research at a global scale," Iftekharuddin said.

Stroke is the second most frequent cause of death in the United States, and a major cause of disability in industrialized countries, leading to high socioeconomic costs.

Diagnosis of the most common form of stroke, triggered by an incident in the brain known as thrombosis, involves scanning the presence, location, extent and evolution of lesions developed from the brain trauma.

An automated method to do that type of analysis of the lesions would support clinicians and researchers, bolstering their findings in the ongoing search for better methods of stroke detection.

The recent competition was conducted in three phases. In the first phase participants were allowed to download the training data for algorithmic tweaking and tuning. Then they evaluated their segmentation performance on the training data and submitted a short paper describing the results and the segmentation method that was used. Finally on the day of the challenge, an independent set of test scans were made available and analyzed on the spot by each team, after which the methods were ranked according to their performance.

The challenge results can be seen at http://www.isles-challenge.org/. This research is funded by a National Institutes of Health grant (NIH).

Among the new projects being undertaken by Vision Lab and VIVA researchers are collaborative works with EVMS on autism and automated cell image analysis for nano-particle tracking for future targeted drug delivery applications.

On Nov. 1, Iftekharuddin was appointed to a three-year term as associated editor of the journal IEEE Transactions on Image Processing, one of the world's leading journals in image processing engineering.