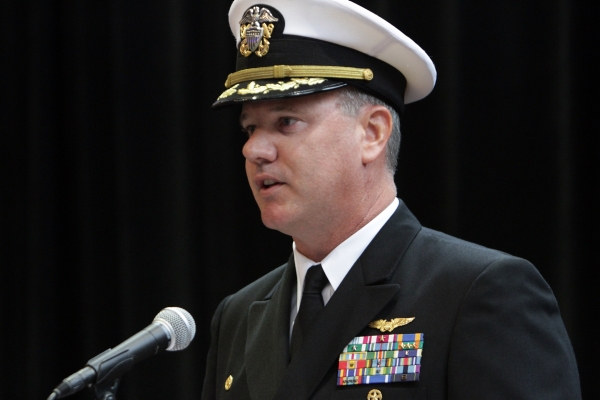 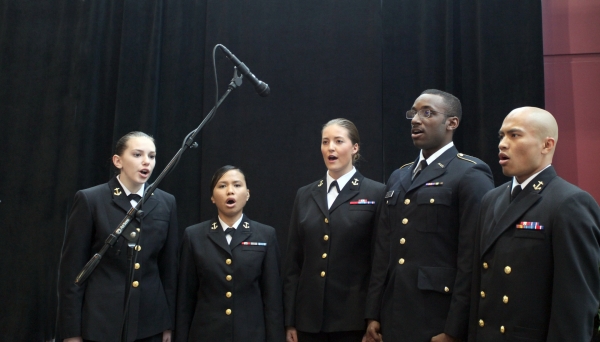 "Each of you should be proud of the strong ties Old Dominion University has with the military, and the unwavering support it provides to our veterans," Beaver said at the mid-day ceremony inside Webb University Center that was attended by students, staff and faculty.

"They are just a few of the hundreds of stories of veterans who have graduated from your University who have gone on to do great things for our nation," Beavers said.

Beavers urged all in attendance to "never lose sight of what this day truly means," and to donate or volunteer to help service members and wounded veterans.

Ellen Neufeldt, vice president for student engagement, noted that more than a quarter of Old Dominion's 25,000 students are military-affiliated.

"In keeping with Old Dominion's strategic priority, our veteran enrollment continues to rise and we are working continually to better define and demonstrate what it means to say that we are a military friendly university," she said.

Members of ODU's ROTC units also took part in the ceremony in which professor Dana Burnett, of the Darden College of Education, was the recipient of an honorary flag.

A different academic college from the University is chosen each year to select a veteran student, faculty or staff member to receive the nation's colors.

Burnett served in the U.S. Navy for 26 years, including two tours with Special Warfare in Vietnam, retiring as a Captain before coming to ODU.

Ted Van Horn, commander of the 2nd District American Legion, was the guest speaker. A Vietnam veteran, Van Horn served in the Marine Corps from 1960 to 1970 and is a former local president of the Vietnam Veterans of America. Van Horn holds a master's of educational administration from Old Dominion.