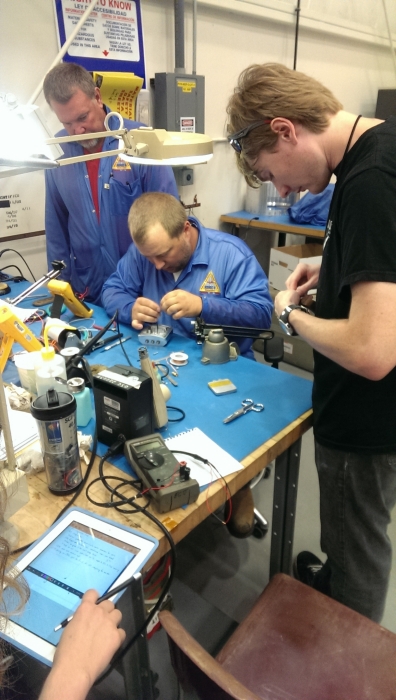 Connor Huffine, works to construct the experimental payload Monarch-One, launched into sub-orbit in June. (Below) a short video of the rocket being launched.

Many Old Dominion University students have probably fantasized about strapping their semester's worth of homework to a rocket. But for a group of students from the Batten College of Engineering and Technology, an actual rocket's blastoff was the culmination of their work.

The team of 10 Old Dominion students spent their fall and spring semesters creating Monarch-One, an experimental payload designed to measure an onboard solar cell's output voltage and current throughout a flight high into the atmosphere.

In late June, the team attended a launch at the Mid-Atlantic Regional Spaceport on Wallops Island. Along with 13 other schools, the Old Dominion engineers' experimental payload was blasted into sub-orbit for a 15-minute flight, transmitting flight data, while measuring the output characteristics of a solar cell that is exposed to the full spectrum of the sun's light.

"It was a pretty unique experience," said Connor Huffine, a fourth-year electrical engineering student who wrote the code that allowed the payload to collect data while airborne.

"Everything had to work, because we had one chance. It was a real challenge to make sure everything went well," he said.

As part of NASA's Rocket Week, ODU's payload, Monarch-One, was launched - along with payloads developed by other schools - using an Orion Sounding Rocket.

"This type of hands-on, project-based learning is a fantastic experience for the students," said Dimitrie Popescu, associate professor of electrical and computer engineering and the lead faculty adviser for the project. "It requires both knowledge and hands-on experience, so in that way it provides great skill development for the engineering students.

"They also get to see their work get blasted off with a rocket, which is very exciting," he said.

The final Monarch-One report recently completed by the group indicates a successful mission for the student-designed payload. Measurements taken from the solar cell in outer space exceeded expectations for operation and recorded values, demonstrating that the capability for solar cells is much greater outside the Earth's immediate atmosphere than on the ground.

The report also indicates radio signals were received from the payload at the Old Dominion University satellite ground station and the team's portable receiver station at the Wallops Flight Facility. This will open further opportunities for communication with orbiting nanosatellites launched by other universities and international groups, with which Old Dominion collaborates through the Virginia Space Grant Consortium.

There are also opportunities to advance the work completed by the team, with follow-up payload Monarch-Two, on which a new Old Dominion University team is currently working. The team is preparing to compete for RockSat-C 2016 during selection of final proposals in January.

"We need to be among the top 14 teams to be selected to participate again," Popescu said. "We are very hopeful to continue our multi-disciplinary research next summer."