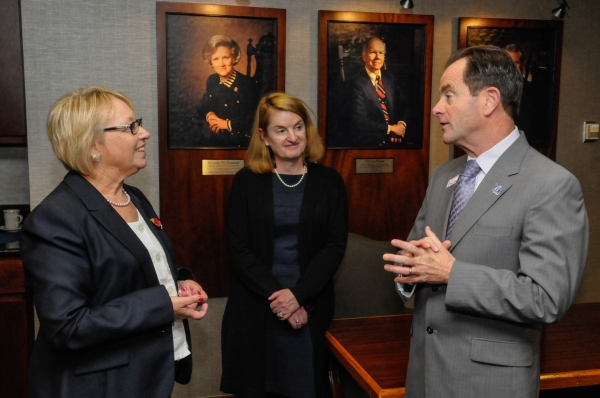 The Atlantic Ocean divides them. Concern about what it could bring unites them.

A traveling delegation of three Members of Parliament (MPs) from the United Kingdom visited Old Dominion on Nov. 3, attracted by the University's commitment to multidisciplinary research and advocacy in the area of sea level rise mitigation and adaptation.

The MPs, one from the ruling Conservative Party, and two from the opposition Labour Party, heard President John R. Broderick talk about the University's vision for a multidisciplinary approach to the problem of sea level rise. They also listened intently to a presentation by Ray Toll, director of coastal resilience research at Old Dominion, about the Intergovernmental Planning Pilot Project led by the University.

Speaking about the geography of the low-lying University campus itself, and its efforts to build partnerships with government, nonprofits, the military and other citizens, Broderick told the British guests that Old Dominion is eager to share the knowledge it has gained with other low-lying areas.

"You couldn't have picked a better school in the United States to come and talk about this issue," Broderick said. "If you look over my shoulder, at the end of the street we have the Elizabeth River. If you go a half-mile in the other direction, you run into the Lafayette River. We ourselves have experienced the kind of flooding that makes it important to think about these issues from an interdisciplinary perspective."

In his presentation to the visiting politicians, Toll spoke about the Pilot Project's mission to develop a regional "whole of government" and "whole of community" approach to sea level rise preparedness and resilience planning in Hampton Roads that could be used in other coastal regions.

"We are now at the 18-month point of our Pilot Project. The challenge now is how to integrate this together into policy," Toll said.

The visiting MPs were impressed with the all-hands approach that the University has taken on the issue, making it less of a political debate, and more focused on collective action.

"Clearly, you have a very important role here," said Conservative Party MP Sheryll Murray. "Universities can play a key role in these discussions, getting the word out about climate change and sea level rise in an evidence-based fashion. It seems from what we've heard, there is a real push for your University to do that work here."