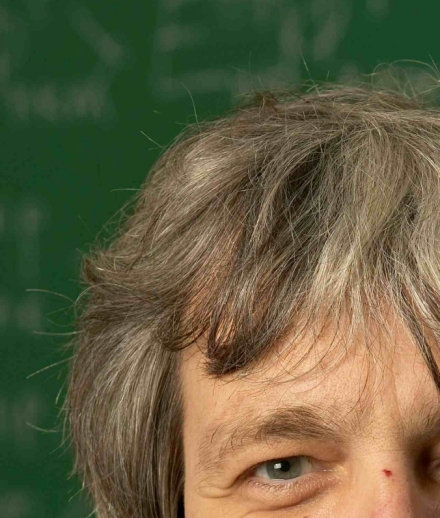 Physicist Sebastian Kuhn and the long-range plan for nuclear science report (below) he helped write. 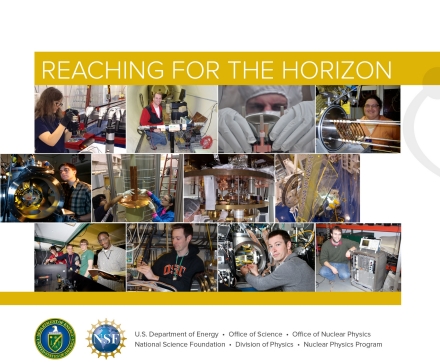 The future of nuclear physics research in the United States has Old Dominion University's name all over it.

The Nuclear Science Advisory Committee last month released its latest "Long Range Plan for Nuclear Science," which is requested approximately every decade by the U.S. Department of Energy and the National Science Foundation.

The back cover of the 150-page report features 12 photographs unaccompanied by captions. But one needs no explanation - a photo of a particle detector with "Old Dominion University" clearly printed on it.

The photo was taken in ODU's high bay laboratory, where the particle detector was built for use at the Thomas Jefferson National Accelerator Facility in Newport News.

But that isn't all. Another shot used on the report's cover, in the upper left corner, was also taken in the high bay, where Old Dominion undergraduate student Katheryne McMahan is shown hard at work.

Old Dominion's influence on nuclear research is seen inside the report as well.

Experimentalist and Eminent Scholar Sebastian Kuhn was among 59 scientists who had a significant hand in shaping the latest long range plan.

More than a year ago, the Department of Energy and the National Science Foundation requested an update to the nuclear advisory committee's 2007 report.

In a letter, the committee was asked "to provide a framework for coordinated advancement of the nation's nuclear science research programs" over the next decade.

Kuhn was nominated for the "working group." After consultation with Old Dominion colleagues, he wrote sections of the report on studying the relationship between quantum chromodynamics and nuclei to better understand and predict nuclear properties.

"It is an honor to be able to help shape the future of our field, in the sense that we can formulate what our most important aspirations are and what should be done next," Kuhn said.

The first recommendation in the report is to continue to capitalize on earlier investments. Specifically, the recommendation refers to the work associated with the 12 GeV Upgrade at J-Lab, one of three multiuser facilities in the country. It is where Old Dominion has the largest presence of scientists involved with the Continuous Electron Beam Accelerator Facility, or CEBAF.

"Jefferson Lab having this strong endorsement, first paragraph under the first recommendation, is absolutely crucial for us," Kuhn said.

The report also suggests the development of the first Electron-Ion Collider to study quantum chromodynamics, the theory that describes how nuclear particles quarks and gluons build protons, neutrons and nuclei.

The billion-dollar project is expected to be eventually built at either J-Lab or the Brookhaven Lab on Long Island.

Kuhn said ODU professor Charles Hyde is among the originators of the thought behind the ion collider.

"People have been talking about it for years," Kuhn said. "But it's becoming realistic enough that people are really studying various detector concepts for what kind of novel detectors they need to exploit this machine."

Reaching for the Horizon: The 2015 Long Range Plan for Nuclear Science, can be viewed here.