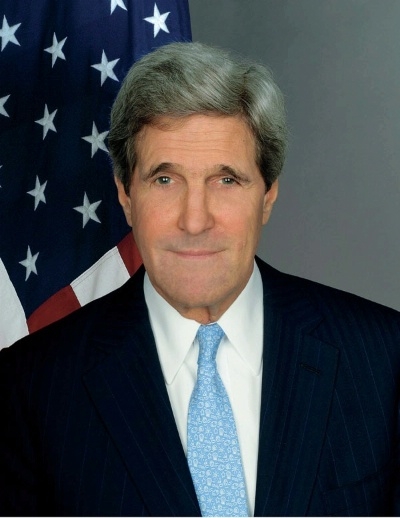 Kerry's address is tied with the University's lead role in research and education surrounding the complex issue of sea level rise. The University established the Center for Sea Level Rise and convened the Hampton Roads Sea Level Rise Preparedness and Resilience Intergovernmental Planning Pilot Project that was initiated by the White House in late 2013 to serve as a blueprint for low-lying communities worldwide that are threatened by encroaching waters.

Kerry will deliver his address at 11:30 a.m. at the Ted Constant Convocation Center. Welcoming Kerry will be Old Dominion COO David Harnage, America Luna, a student-veteran pursuing a master's degree in higher education and acting ODU Provost Chandra de Silva. They will be joined by other university leadership, local and state dignitaries and university students from Old Dominion and some of the region's other colleges.

To view a livestream of the speech, go here.

As part of his visit, Secretary Kerry will also meet with a group of Old Dominion University students majoring in various programs-such as engineering, oceanography, modeling and simulation, and social sciences-aspiring to be the next generation of scientists working on solutions to the issues of climate change and sea level rise.

"The entire Old Dominion community feels a deep sense of honor that Secretary Kerry chose to visit our campus to learn more about climate change and sea level rise research and initiatives being undertaken here, and also to shed light on the importance of addressing these issues as a global community," Old Dominion University President John R. Broderick said.

Kerry's visit to ODU to speak about sea level rise, and its connection to national security, is particularly relevant due to the nature of the threat being faced by the region, and in particular the City of Norfolk which is home to the largest naval base in the world. The National Oceanic and Atmospheric Administration ranked the city behind only New Orleans in regards to population threats from sea level rise. Also, in 2012, the U.S. Geological Survey classified much of the Atlantic coastline, including Virginia, as a "hotspot" for sea level rise with rates increasing at up to four times the worldwide average.

In about a month, Kerry will travel to Paris, along with government dignitaries from most every country around the world, for a United Nations conference intended to broker a lasting agreement that would "transform the global energy economy and help avert the worst effects of climate change," according to a Financial Times op-ed Kerry penned late last month.

"ODU's Climate Change and Sea Level Rise Initiative has facilitated research and education in all aspects of climate change and sea level rise, and it houses the Center for Sea Level Rise and the Hampton Roads Sea Level Rise Preparedness and Resilience Intergovernmental Planning Pilot Project, which is the first of its kind," Kirby said.

Old Dominion President John R. Broderick created the University's Climate Change and Sea Level Rise Initiative (CCSLRI) in 2010, which positioned the University as a leader in the study of the causes of sea level rise, and efforts to adapt and mitigate against the effect of rising sea levels worldwide.

The initiative expanded in 2013 with the creation of the Mitigation and Adaptation Research Institute (MARI), which evolved from the CCSLRI. MARI is designed to be a think tank supporting development of coastal resiliency strategies.

More than a year ago, Old Dominion convened the White House-sponsored Hampton Roads Sea Level Rise Preparedness and Resilience Intergovernmental Planning Pilot Project. This national pilot project, the first-of-its-kind in the nation, utilizes a "whole of government" and "whole of community" approach to the development of local strategies for sea level rise preparedness and resilience planning that can be used as a blueprint to combat increased flooding in other regions across the U.S. and internationally.

The University's commitment to finding solutions to the challenge of sea level rise is not only demonstrated through its institutes, center and national pilot program, but also in preparing the next generation of scientists that will address issues of climate change and sea level rise and promote action. Old Dominion offers an interdisciplinary degree program that readies future sea level rise and coastal resiliency experts through hands-on, immersive research opportunities with award-winning faculty.

"Impacts from sea level rise and climate change are already being felt in Hampton Roads and communities worldwide," said Morris Foster, vice president for research at ODU. "But those impacts will give way to severe consequences in our near future if we, as a society, are not prepared. Old Dominion University is a leader in the research and development of resilience measures that will help us address these threats in order to thrive with the rising waters."

More information on sea level rise, mitigation and water resiliency can be found at the Center for Sea Level Rise at Old Dominion website.