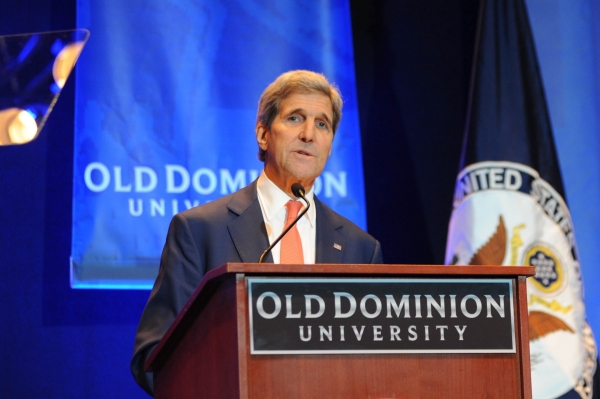 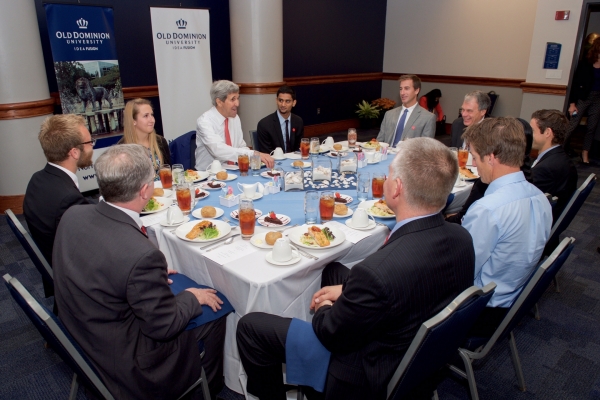 Following his address, Secretary of State John Kerry attended an informal lunch with a small group of ODU students to discuss their research and other topics. Photo courtesy of the U.S. Department of State.

U.S. Secretary of State John Kerry recognized Old Dominion University as an institution to emulate in a speech about climate change and national security that was delivered during a Nov. 10 visit to campus.

"The work that ODU is doing with climate change and sea level rise is work that every university should be doing," Kerry said, during the address at the Ted Constant Convocation Center that touched on many environmental themes.

Old Dominion COO David Harnage, in opening remarks, said climate change and sea level rise are "top of mind" issues for many students at the University, while also noting that Norfolk is a coastal city facing rising seas that is home to the world's largest naval base.

"Our world-renowned scholars, researchers and practitioners are tackling all aspects of sea level rise and using the knowledge gained locally, to educate others about the impact of recurrent flooding in coastal cities around the globe," he said. "Our community feels a deep sense of honor that Secretary Kerry chose to visit Old Dominion to learn more about innovative research and initiatives being undertaken here, and also to provide his views on the importance of addressing resilience and national security."

In his address, Kerry announced the formation of a task force to incorporate climate change into decision-making at every level of government.

Kerry spoke to an audience of about 1,000, which included U.S. Rep. Bobby Scott, former Iowa Sen. Tom Harkin and dignitaries from the Governor's cabinet as well as the state's Congressional delegation and military/NATO leaders. During the 45-minute speech, Kerry lauded the work of the University's Hampton Roads Sea Level Rise Preparedness and Resilience Intergovernmental Planning Pilot Project.

The two-year project seeks a "whole of government" and "whole of community" approach to mitigating and adapting to rising sea levels in the region.

Earlier in the day, Kerry toured Naval Station Norfolk. Kerry said the call to action is urgent given the security threat sea level rise poses for the base and the U.S. fleet.

"The land it is built on is literally sinking, " said Kerry, noting the sea level around Norfolk is rising at twice the global average and is projected to be 5 ½ feet higher by the end of the century.

Kerry, who was sworn in as the 68th U.S. Secretary of State in February 2013, has been a consistent champion of environmental issues during his four decades of public service. At Old Dominion, he recalled his service in the Vietnam War, and the vital importance of the Mekong River to that country, even during a time of conflict.

"I remember being struck by how, despite the war, the Mekong was a center of commerce and focus of daily life," Kerry said. He added that the strategically and commercially important Norfolk harbor serves the same role for Hampton Roads. "So people here know the significance of the potential threat from climate change and sea level rise."

A decorated military veteran, Kerry said he was excited to be in Norfolk so close to Veterans Day, given the region's long military history. He thanked Army veteran and Old Dominion graduate student America Luna for introducing him.

"I'm very grateful to her for her service, and for the work she is now doing to help fellow veterans," he said.

Luna said Kerry's warm greeting put her at ease. "I wasn't nervous until I got here, but then I met him and he's a very nice gentleman," said Luna, who enlisted at 17 and served five years in the Army, including two tours in Iraq.

Kerry praised the work of the military in addressing the concerns of a changing climate, with the Navy switching to 20 percent renewable fuel sources. He cited the words of his former Senate colleague John Warner (R - Va.) who was chair of the Armed Services Committee.

During his speech, the Secretary of State addressed climate change skeptics, noting that 97 percent of thousands of studies conducted worldwide suggest climate change and sea level rise are real.

"I wish I were wrong about this," Kerry said. "It would be better for all of us if I was exaggerating the urgency of this threat."

As an example, the 2004 Democratic Presidential nominee asked for a show of hands among audience members no older than 29.

"Those of you who raised your hands, in your lifetime you have never experienced a month, one month, where the temperature was below the 20th century average," Kerry said.

Expressing regret that climate change and sea level rise have become partisan political issues, Kerry stressed it isn't about threats to polar bears and butterflies, "as people try to mock it." Rather, he said, it is an issue with real human effects.

"Climate change is not just about Bambi, it's about all of us," he said.

Kerry argued that, while the rise of the extremist group Boko Haram in West Africa and the refugee crisis in Syria weren't caused by climate change, they were accelerated by crippling drought in those already challenged regions and produced a domino effect.

"Just as the refugee crisis in Syria has poured over the borders into Europe, these issues will affect all of us, no matter where we live," Kerry said.

He added that as polar ice caps melt, exposing open seas inside the Arctic Circle, a new threat to global security will arise through the global competition for resources.

But Kerry emphasized that these problems are still fixable through prompt, collective action. Citing President Barack Obama's rejection of the Keystone XL Pipeline project last week as an example, Kerry said the U.S. must be a world leader on climate change issues.

"America's choices matter to the rest of the world," Kerry said. "If we don't act with boldness now, it will be the single biggest betrayal by one generation to the next one.

"For our sake, and for the sake of our children, we have to get this right," he added.