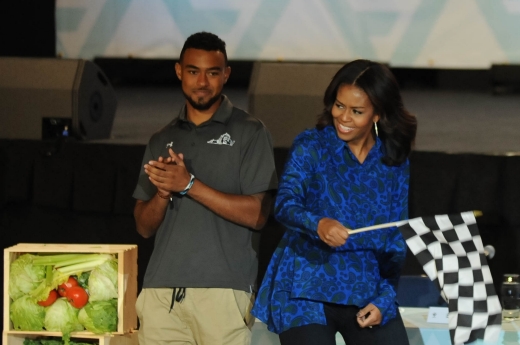 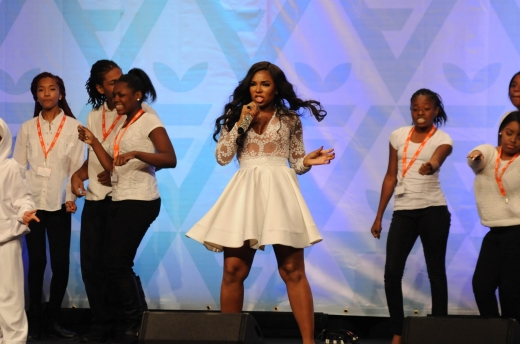 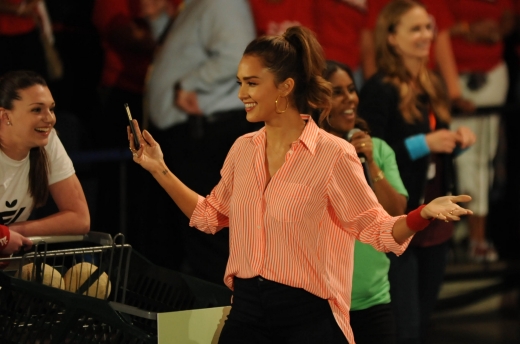 As the parade of stars was introduced, the crowd got louder and louder.

More than 4,000 filled half of Old Dominion University's Ted Constant Convocation Center for FNV Live, a nationwide program designed to encourage the consumption of fruits and vegetables.

Actress and entrepreneur Jessica Alba received wild applause. Grammy-winning singer Estelle performed to cheers from the crowd of high school and university students and members of the community. The introduction for actress Gabrielle Union was drowned out by high-pitched shrieks from girls in the audience who are fans of her current show "Being Mary Jane."

All of this cacophony was just the crowd warming up its lungs.

The arrival of the guest of honor, First Lady Michelle Obama, resulted in a roar as loud as any sold-out basketball game. The First Lady pledged to support FNV, a brand launched earlier this year by a collaboration of companies, celebrities, athletes and foundations to increase consumption of fruits and vegetables.

"When you turn on the TV or you go online, you hardly ever see any really cool ads for fruits and vegetables," Obama said. "We know that those commercials influence almost everything that we do. So we figured why shouldn't fruits and vegetables get in on a little bit of the action?"

Following a short speech, First Lady Obama joined a competition called the "Supermarket Sweep," along with celebrity participants that included Old Dominion football player Christian Byrum. The challenge involved teams of participants answering trivia questions about fruits and vegetables, and then racing shopping carts through slalom courses laid out on the floor.

Whenever the First Lady appeared on the video screen at the Constant Center, the crowd erupted in cheers. As she was leaving the event, Obama went down one side of the stadium shaking hands, and was greeted with a rush of fans.

ODU cheerleaders also participated in the event, handing out prizes to the audience.

FNV started this summer with TV and billboard advertising in the area. It is led by the Partnership for a Healthier America, which is a nonpartisan, nonprofit organization led by health advocates committed to fighting childhood obesity.

The FNV initiative is focusing initially on two markets: Hampton Roads and Fresno, Calif. These cities were chosen based on fruit and vegetable access, diversity, geography and obesity rates.

As First Lady, Michelle Obama has encouraged America's youth to fulfill their promise, through initiatives targeted at education and wellness, including promoting healthy eating.

In 2010, she launched Let's Move!, a program bringing together community leaders, educators, medical professionals, parents and others in a nationwide effort to address the challenge of childhood obesity.