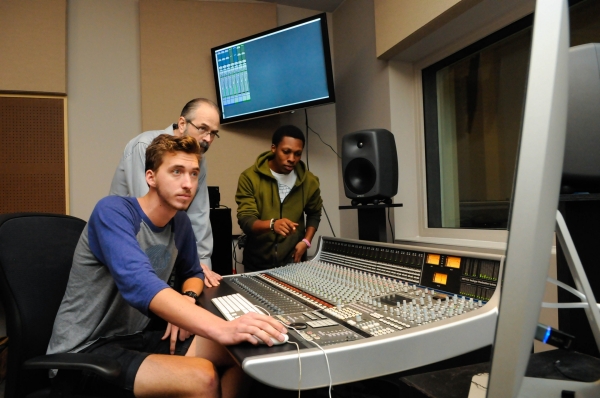 The message from John Toomey, chairman of Old Dominion University's department of music, came through loud and clear.

The sound studio, which features about a half-million dollars worth of recording equipment alone, is the centerpiece of an addition of classrooms and practice studios to the Diehn Center that opened last year. All rehearsal rooms are equipped with microphones that feed into the mixing board, so recording can take place throughout the building.

One classroom is filled with computers loaded with a variety of recording and musical training software, including a program that scripts marching-band formations.

And the sound studio is ground zero for the Music Industry degree program, which also originated last year, and that will prepare ODU graduates for careers in music education, sound technology and other areas of the music business.

The studio features an expansive mixing board equipped with the latest in Pro Tools technology, the standard recording industry software. Sitting at the board, the sound engineer faces a tracking room in which performers can sing and play into top-of-the-line, $3,000 microphones. A smaller isolation booth within the tracking room is also available for narration and voice-over work.

Already, the setup is garnering acclaim. Well-known local musician Skye Zentz recently used the studio to record the soundtrack for a friend's entry in the popular 48 Hour Film Festival. Zentz was awarded Best Musical Score for her project that was engineered by Alex Morton, a senior in the Music Industry program.

The studio is not designed to be a commercial operation, however, cautioned Mark Schulz, the music lecturer hired last year to teach and direct the studio. ODU students learn to operate the equipment and Pro Tools over a series of four courses. They are then free to engineer projects featuring ODU students or with outside musicians with whom they are connected.

"First and foremost, this is about serving the kids," Schulz said. "We want to make sure we're giving students varied experiences behind that board. It's possible in the future it could become an entrepreneurial venture for the students, but we're not just going to hang out a shingle."

An accomplished jazz pianist who has played around the world, Toomey motioned to the stacks of sound equipment flanking the mixing board with the pride of a new father.

"When I go into a recording studio, this is what I see," he said. "Outboard effects, compressors, limiters, etc. These are things that you want to have if you want your kids to understand what it is they're going to actually be working with when they get out in the real world."