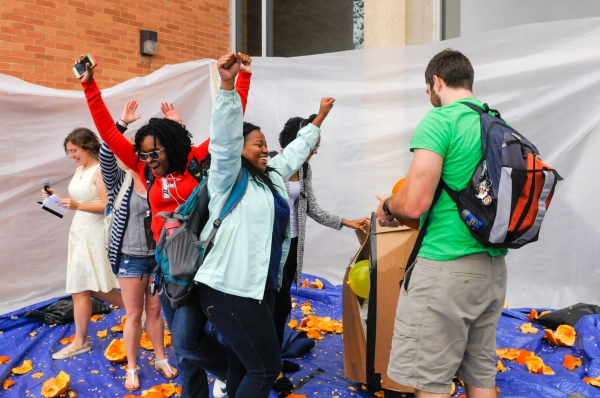 Physics students celebrate the success of their homemade pumpkin-catcher.

Only three lived to tell about it.

Homemade creations of cardboard boxes, Styrofoam, egg crates, bubble wrap, pillows, sheets, blankets, 2 x 4 boards, even balloons, were cobbled together and positioned on a plastic tarp to await a pumpkin dropped by a student perched on the building's roof.

The goal: to pull an intact pumpkin from the aftermath of an approximately 70-mph collision.

It was a blustery day; most pumpkins missed or grazed the catchers and exploded upon impact with the ground. Some were caught but shattered anyway.

Just two small teams of Old Dominion students and one from a high-school engineering club found their pumpkins nestled safely inside their catcher.

"I've been wanting to come and do this for a long time," said high-school physics teacher Brian Meechan, who brought 13 students from the international baccalaureate program at Virginia Beach's Green Run High.

He said his students worked three weeks on the design and construction of their successful pumpkin catcher, which was a deep cardboard box layered with recycled packing materials.

But for ODU student Samantha Reyes and her two teammates, their balloon-filled catcher was not up to its intended task.

"I'm a little disappointed," Reyes said with a laugh after displaced balloons were sent floating into the air. "But we went out in style."

"You have to stop it over a period of time," said Clark, one of the day's designated droppers. "No matter what it's made of, if it stops all at once, it's going to break. The top of the pumpkin's going to hit the bottom of the pumpkin, is a good way to look at it."

The way ODU junior Andrew Chu looked at it, a military tarp attached with string and draped over a four-foot tall wooden frame just might work. So he and a partner spent $8 on boards and plywood and were careful to work three feet of play into their tarp.

"I knew if we tied it here we'd have at least a foot before it hit the ground," Chu said, an unharmed pumpkin resting atop his catcher as proof of its worthiness. "I knew we were only going to have one shot."

A video report from the Pumpkin Drop can be viewed here.