Nebraska Professor Timothy Gay Speaks about the Physics of Football 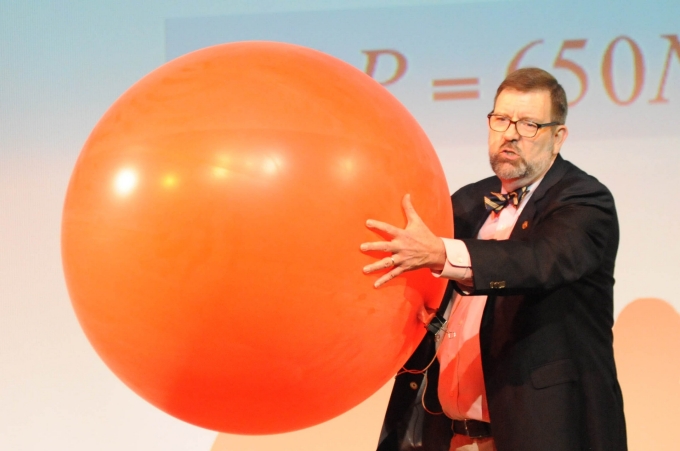 On the stage of the University Theatre were an Old Dominion football helmet and football. The screen featured logos of the New England Patriots and the University of Nebraska Cornhuskers. But the stage also included some unique implements, such as an oxygen tank, lead bricks and a stepladder.

For 90 minutes Thursday, Timothy Gay, author and physics professor at the University of Nebraska - Lincoln, delivered a presentation entitled "The Physics of Football" to an audience of a few hundred, including two dozen Old Dominion football players.

Delivered as part of the ODU Presents lecture series, Gay's talk covered his time "teaching" the world's largest physics class - via a series of short videos that played to more than 80,000 fans on the video board during Nebraska games.

"They came to the physics department and asked if there was someone who loves football and who is a shameless self-promoter," Gay said during his presentation. "Someone told them, 'Oh, that would be Tim Gay.' "

Gay enjoyed the experience, and thinks outreach efforts of this nature are important in the sciences.

"It's important to explain science to the public, who are paying our bills, in a way that they are interested in. And at the University of Nebraska, that way is football," Gay said.

Producing the videos for HuskerVision, the University of Nebraska's video production team, turned Gay into a media star. His short videos featuring Nebraska stars like Heisman Trophy winner Eric Crouch led to NFL Films hiring Gay in 2001 to write and appear in a series of five-minute segments for the show "NFL Blast," explaining the game to an international audience. Gay has also appeared on "ABC World News Tonight" and ESPN, and wrote the book "The Physics of Football."

Gay's enthusiasm for the subject, which was apparent during his Old Dominion appearance, is based on his own long history with the sport.

Born in Ohio in 1953, Gay was a lineman for the hapless California Institute of Technology Beavers. He wisely earned a degree in physics at the same time, ultimately earning a Ph.D. in experimental atomic physics from the University of Chicago in 1980. His research interests include the scattering of electrons by atomic and molecular targets and elementary particle physics.

During his presentation, Gay played some of the videos, which use football to explain such topics as Newton's laws of motion, projectile motion, kinematics and the ideal gas law. The presentation was interspersed with actual physics experiments, where Gay did things like put a melon inside a football helmet and drop it onto the stage from the top of the ladder.

When he dropped a second melon, which wasn't sheltered by a helmet but didn't smash like expected, Gay remarked, "There's nothing like doing an actual physics demonstration to disprove the laws of physics."

His appearance at the University was cancelled last winter by an unexpected storm. Gay told the audience he was happy to appear at Old Dominion, because he has worked collaboratively with ODU physicists like Charles Sukenik, who introduced him, at the Thomas Jefferson National Accelerator Facility in Newport News.

"I've been here three to four times in the past decade. You have a great physics department at Old Dominion University," Gay said.

ODU Presents features multidisciplinary speakers that support the University's research initiatives and community outreach efforts across all of its colleges.