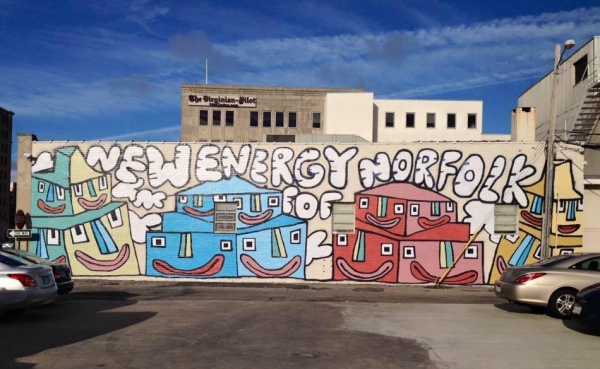 The mural "New Energy of Norfolk," created by associate professor Rick Nickel (below) and lecturer Clay McGlamory, adorns a building in the downtown NEON arts district. 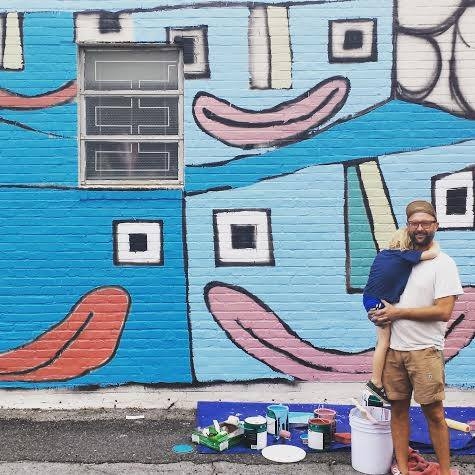 The new NEON arts district designed to encourage and celebrate the "New Energy of Norfolk" received a colorful boost from Old Dominion University to get off the ground.

Associate professor of art Rick Nickel, with an illuminating assist from adjunct instructor Clay McGlamory, created one of 13 murals on downtown buildings that were commissioned for the recent NEON Festival.

The NEON District, supported by the Downtown Norfolk Council, is the city's first official "home" to the arts. It features the venerable Chrysler Museum of Art and the Harrison Opera House, but also new creative and exhibition venues such as Work/Release and Glass Wheel Studio.

Nickel's conception is called "New Energy of Norfolk," and adorns the back of the Virginian-Pilot newspaper's annex at the corner of Brambleton Ave. and Magazine Lane.

It features an array of smiling buildings, with eyes that flash at night thanks to motion lights installed by McGlamory, a print and neon artist.

"The idea was to represent that as a community, we're a collection of buildings and places, but we're also people, too," said Nickel, who teaches ceramics and art education. "A community should be friendly, it should be welcoming and accepting to other people.

"We're all separate buildings, but we should be working together toward the common goal," he continued. "Until that happens, we're not going to move forward."

Nickel writes about local art and illustrates for altdaily.com, but he said being on the creative end of a project commissioned by the city is an honor he doesn't take lightly.

"It's such a pleasure to be accepted into the city community as an artist, after 13 years here, and to be recognized enough to have my work installed in a location where everyone can see it," Nickel said. "It's overwhelmingly amazing for me."

Once he was contracted for the mural and drew it up digitally, Nickel, his assistant Stephanie LiPuma, an ODU graduate, and others projected it onto the wall over a few nights and spray-painted the outlines.

He then enlisted volunteers to fill in the figures through a paint-by-numbers-type system to simplify the process.

"This is a piece for the community and the community just showed up and wanted to help," Nickel said. "I don't normally work that way, but in this case it worked out way better, because we got it done on time. The help was absolutely needed. I could not have done it by myself."

Nickel said ODU art students get involved in projects with community groups and schools, including the Governor's School for the Arts, as much as possible. They are preparing to teach classes at the Chrysler Museum, Nickel said. And he and LiPuma are also working on an animation project at Salem High in Virginia Beach.

Nickel said he hopes his students find a home in the vibrant NEON district that has long been needed.

"It's important," he said. "When I first came here, I knew the artists were out there, but I didn't know where or who to talk to. We've needed a place where our seeds can be put in the ground and find root, and I think it's definitely happening now."

An interactive Google map of the entire NEON District with photos and descriptions of all the exhibits and murals can be found here.