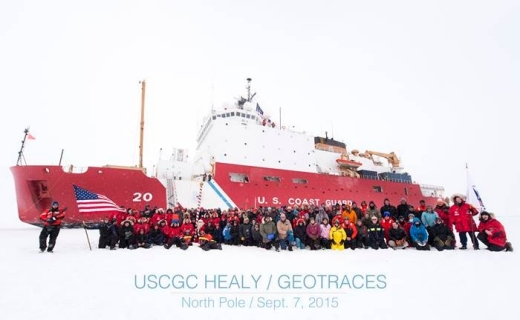 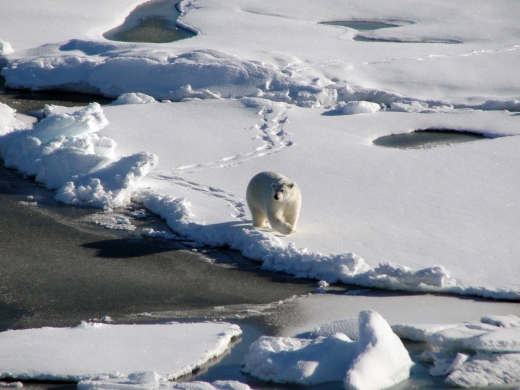 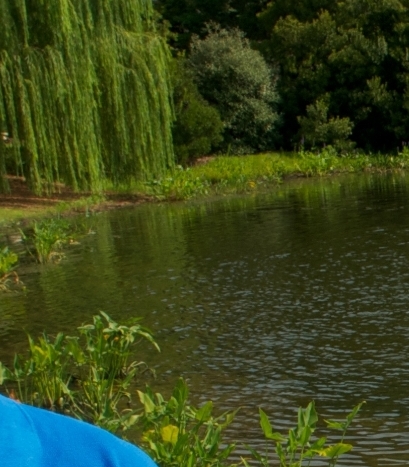 An Old Dominion University scientist, two graduate students and a lab supervisor were part of the first unaccompanied research expedition to the North Pole by a United States surface ship.

Biogeochemist Greg Cutter, a professor in the Department of Ocean, Earth and Atmospheric Sciences, led the ODU contingent on the 65-day journey of the U.S. Coast Guard icebreaker Healy that was completed this week.

It reached the North Pole on Sept. 5, the first to do so unaccompanied by another ice breaker. Additionally, the Healy is just the fourth U.S. surface vessel to make it to the North Pole, and the first in a decade.

"Although this was my third expedition north of the Arctic Circle, it was my first time to the North Pole," Cutter said while still aboard the Healy. "To say that you have been to the North Pole is special because so few have been there. It is quite exciting."

Cutter said that while the Arctic Ocean is the world's smallest ocean basin, a quarter of the world's fresh water empties into it. It is the least-studied basin on the planet, though, because of the harsh environment and how difficult it is to get there to take water samples.

"There are very few studies of the chemistry of the Arctic Ocean and its direct connection to ocean biology," Cutter said.

ODU's researchers worked on two National Science Foundation grants: one that funded specialized sampling and generated nutrient, oxygen and salinity data for the entire expedition; and another to study the cycling of arsenic and selenium in the same waters.

"These are the first known measurements of arsenic in the Arctic Ocean," Cutter said. Its concentrations are similar to those in the Atlantic and Pacific oceans, "but it shows little evidence of biological uptake by phytoplankton," the microscopic plants critical to the Earth's photosynthetic activity.

"This contrasts with the typical nutrient-like behavior for dissolved arsenic, a primary reason why it is toxic," Cutter continued. "The question them becomes, if the future Arctic Ocean has less ice, will phytoplankton become more numerous due to more light penetrating into the water, thus increasing the toxic effects of arsenic?"

The Healy actually had company at the North Pole. A German GEOTRACES research icebreaker called the Polarstern was there at the same time; the crews walked across the sea ice to visit the other ship. A third ship, the Canadian icebreaker Amundsen, is simultaneously studying the Arctic as well.

"To be at one of the remotest points on the planet at the same time, as part of the same international program GEOTRACES, is worth recognizing," Cutter said.

The expedition wasn't without its challenges. Commissioned 16 years ago, the Healy - the Coast Guard's premier high-latitude vessel, capable of breaking over 10 feet of ice - suffered a 10-day failure of one of two evaporators that makes fresh water.

And near the beginning, many scientific tools didn't work due to the extreme low temperatures. But the Coast Guard airlifted powerful heaters to the cutter to allow the crew to perform its research for the next two months.

The landmark journey, Cutter said, "was actually bittersweet, because we found the ice was very thin and degraded throughout our transit north and south, which made icebreaking relatively easy and uneventful. The degraded Arctic sea ice due to global climate change made our single-vessel achievement possible."

In a release regarding the expedition, the U.S. Coast Guard said, "As the Arctic region continues to open up to development, the data gathered onboard Healy during this cruise will become ever more essential to understanding how the scientific processes of the Arctic work, and how to most responsibly exercise stewardship over the region."