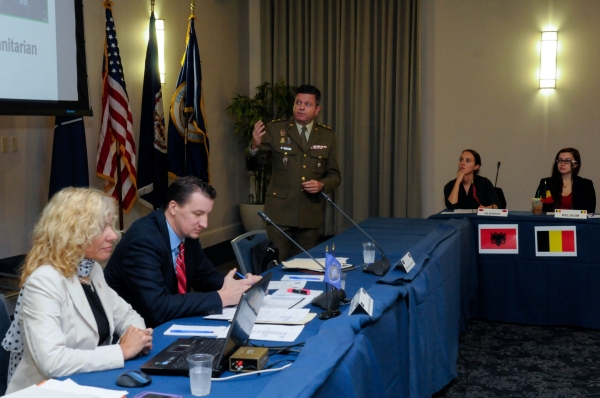 Before Old Dominion University students began their Oct. 29 simulation exercise run by local NATO officials, Alvarez, a Spanish senior military officer based in Norfolk, ran through a brief history of the organization. He talked about its founding in 1949 with 12 charter members, and how the organization has grown to 28 European and North American member-states.

That set the stage for the simulation exercise. Representing different NATO nations, the 29 students debated and attempted to resolve the delicate geopolitical implications of the exercise "Libya: A Broken State."

"And remember, I want you to enjoy this experience," Alvarez said, before a video outlining the Libyan crisis was played. "This exercise was created for you to learn about how NATO works, including the relationship between different nations, and how we can work collectively on complex problems."

Tim Kidd, lecturer of geography in the College of Arts and Letters, said the ultimate testament to the dynamic exercise is that many of the students participating were also attendees in previous years.

"It's unique. We have a lot of people who have wanted to come back, so they obviously have found the exercise rewarding," Kidd said. "I've had students apply for internships from this, change their major. It's a really great exercise and a fantastic opportunity for the students."

The past two years the NATO simulation has been held at Old Dominion's Virginia Modeling, Analysis and Simulation Center in Suffolk and at NATO's North American headquarters near the Norfolk Naval Base. Col. Bill Brown (Ret.) director of Old Dominion's Military Connection Center, said hosting this year's event on the main ODU campus was a tremendous opportunity.

"This is one of those win-win events," Brown said. "We have 70 NATO family members who attend Old Dominion, some of whom stay behind to finish their degrees after their parent or spouse returns to Europe."

In fact, participants representing countries such as Albania and Greece in the Oct. 29 simulation were Old Dominion students who came to the University as dependents of NATO officers stationed in Norfolk.

"It is a really unique experience and they bring a very interesting perspective," Kidd said.