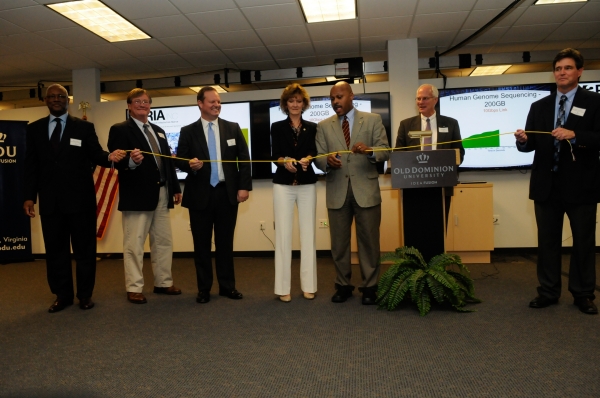 A fiber optic cord is cut at the MARIA 100G dedication at the Virginia Modeling, Analysis and Simulation Center

State and higher education officials gathered this week at Old Dominion's Virginia Modeling, Analysis and Simulation Center for a high-tech "ribbon cutting" to mark the launch of a super high-speed Internet connection between Old Dominion University and Virginia Tech that is part of a broader collaboration among the state's seven major research institutions.

The move allows Old Dominion and other Virginia universities that comprise the Mid-Atlantic Research Infrastructure Alliance, Inc. (MARIA) to increase campus connections to the Internet2 Network to 100 gigabits per second (100G). The connection between ODU and Virginia Tech is the first 100G channel to be implemented in the MARIA framework.

This upgrade will help address the information-carrying capacity required to meet the rapidly advancing needs of high-performance, data intensive research and collaboration. Internet2 is the United States' largest and fastest globally connected research and education network.

MARIA is a non-profit corporation that brings together Virginia's major universities to facilitate access to shared technology infrastructure for research. It is comprised of Old Dominion University, Virginia Tech, the College of William &Mary, George Mason University, James Madison University, the University of Virginia and Virginia Commonwealth University.

Morris Foster, Old Dominion's vice president for research, also attended the event. He remarked that the 100G capability increases the University's capacity to carry out research with large data sets by a factor of 10.

To signify the launch, dignitaries gathered to cut a fiber optic cable to symbolize a break from the limitations of 10G capabilities. The dramatic increase in functionality offered by 100G connectivity was demonstrated through presentations depicting high speed human genome sequencing and expanded storm forecasting/analysis.

"This is a significant accomplishment for Virginia research institutions," Waterfield told a crowd of about 50 people who gathered for the event. MARIA "was formed to step up our game in supporting researchers - it's all about research. We wanted to make sure the network wasn't in the way; 100 gigabits per second puts Virginia institutions among the best connected globally."

Old Dominion's connection will serve its Virginia Modeling, Analysis and Simulation Center (VMASC), the College of William & Mary, Jefferson Lab and other participants in the E-Lite metropolitan network operated by the University in partnership with Cox Communications.

Crowder said $70 million was used to create the infrastructure in Virginia; funding came from multiple sources, including: the Virginia Tobacco Revitalization Commission, National Science Foundation grants and through partnerships among the participating universities, the MBC and the federal government.

The new network, that was years in the making, will help researchers working with large data sets and support deep collaborations.

"It's a big deal to have these capabilities," Jackson said. "It's a game changer for the Commonwealth."

During his remarks, Jones noted that the state's economy is "doing very well," but he added that there is still too much dependence on the federal government. He also asserted the need to "gain balance in our growth machine" and fully utilize the state's people, strategic sectors and infrastructure.

"This is about winning," Jones said. "This is about the bringing together of exceptional talent in our universities... that are doing unbelievable research that can be translated into things that affect the economy. We have the opportunity to be a global powerhouse in this arena."