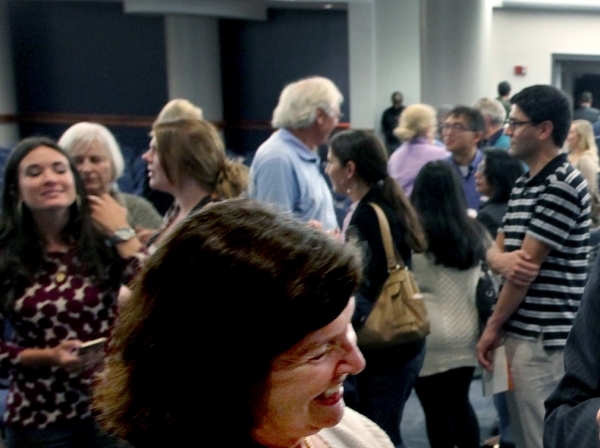 Author Garrison Keillor signs one of his books for a fan after his reading at Old Dominion's Literary Festival.

Author, humorist and radio host Garrison Keillor regaled an appreciative audience with sonnets, limericks and passages from his in-progress memoir - as well as winsome tales from Lake Wobegone - on Monday during his appearance at Old Dominion University's 38th Annual Literary Festival.

Keillor, 73, will retire next summer as host of "A Prairie Home Companion," the popular National Public Radio program he has hosted since 1974.

"I'll try to tie up the loose ends from Lake Wobegone, and in the fall there will be a new host," Keillor said at the close of his hour-long appearance. "Then I'll look forward to listening to the show."

In his trademark deadpan speaking style, Keillor shared passages from the memoir he is writing: "I have discovered I had a really happy childhood, which I had not known before."

To applause, he rattled off the "87 counties of Minnesota," which Keillor said he memorized in 5th grade and raced through recently for doctors to prove his acuity after a health scare.

He also recited what he called the perfect, and only, limerick on the word Syracuse:

"There was an old singer of Syracuse

Who was startled to hear his old dear accuse

Him of rushing and slurring

The words that the writers of lyric use."

"That's a monumental piece of work," Keillor said. "What good does it accomplish, I don't know."

Keillor also recited a few of his favorite sonnets, noting: "I have an obligation to write sonnets because I am an English major."

But on a more serious note, Keillor described his love for composing sonnets like "Supper," which reads in part:

"It was beautiful, the candles, the linen and silver,

The sun shining down on our northern street,

Me with my hand on your leg. You, my lover,

In your jeans and green T-shirt and beautiful bare feet.

How simple life is. We buy a fish. We are fed.

We sit close to each other, we talk and then we go to bed."

"To make one's imagination live within 14 lines of iambic pentameter, with a certain rhyme scheme, is a challenge worthy of an English major," Keillor said. "To take ordinary things and put them into a form that Shakespeare would recognize is a worthy way to spend an afternoon."