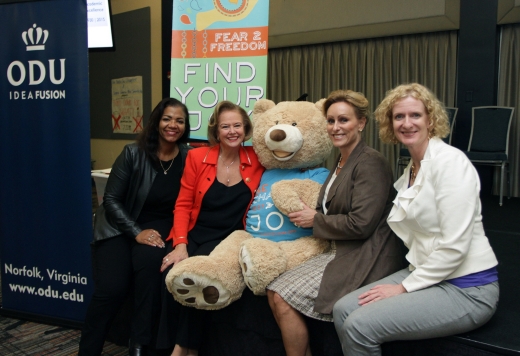 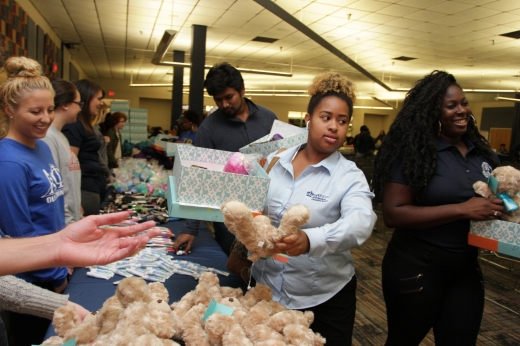 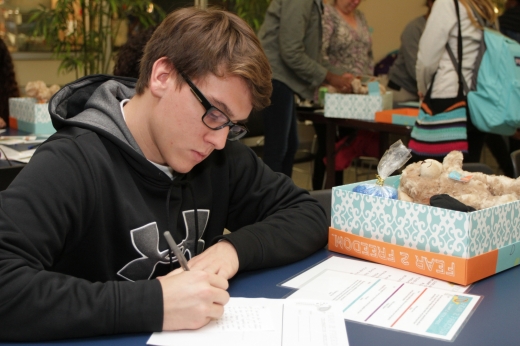 Each Fear2Freedom kit includes a personal note of support from the volunteer who assembled the package.

The Fear 2 Freedom "Celebration Night" event attracted about 300 students as well as faculty and staff members who gathered to assemble F2F Kits which are designed to meet the immediate physical, emotional and psychological needs of those affected by sexual assault.

The packages, which are described by the Fear 2 Freedom organization as "a medical kit for the heart," are meant for distribution to sexual assault victims who have to undergo a PERK examination, during which time their clothing is taken for forensic evidence. Each of the child and adult-specific kits include: a t-shirt and sweatpants, underwear, toiletries and the personal note of support as well as other items such as a "Freedom Bear," storybook, journal or toy and a list of community resources.

Broderick said during her remarks that "sexual violence has no place on our campus" and that the F2F program is "one of many ways students share their time and service with organizations in Hampton Roads."

SGA President Christopher Ndiritu noted that the program fits well within the framework of the Monarchs Rising Up! campaign.

"Together, we are building a welcoming and safe community," he said.

Fear 2 Freedom is a Virginia-based nonprofit organization that works to educate college students on sexual abuse and "restore joy to sexual assault victims." The group was founded in 2011 by Trible, who was raped at gunpoint in 1975.

In recent years, Fear 2 Freedom has delivered more than 9,000 F2F kits to women and children affected by sexual abuse and the group currently has university-hospital partnerships across Virginia. In 2014, Fear 2 Freedom introduced a national campaign to make F2F Kits available to hospitals across the country.

"It breaks our hearts that every two minutes someone is sexually assaulted in our country and one in five females on college campuses are assaulted," Trible, the wife of former U.S. Senator and current President of Christopher Newport University Paul Trible Jr. told the volunteers. "That is unacceptable. Tonight you will make a tangible difference in this issue."

Sequoia Owen, a YWCA program manager, told the student volunteers that she sees tears of relief from overwhelmed victims when delivering the packages.

"The time you take this evening to assemble a kit will bring comfort to a survivor," she said.

For more information about the organization, visit the Fear 2 Freedom website. To RSVP for the Oct. 27 event, go here or call the ODU Women's Center at 757-683-4109. Information about sexual assault prevention and available resources can be found at the ODU S.A.F.E. Program website.